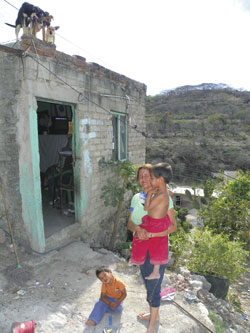 In the Yucatan Times, Aug 2011, Eduardo Cabrera Ruiz wrote an article on Domestic Violence. “A virtual License to Kill.” Quote: “Jalisco-Chihuahua-Morelos-Sonora-the Federal District and Guerrero, are the states with the highest number of reported cases against women, according to the Gender based Violence report of 2010, published by the National Commission for Prevention and Eradication of Violence against Women, a division of Mexico’s Department of Government.

The survey taken indicates one in every three women experience some form of Domestic violence. Based on available data, the rate of homicide per 100,000 women grew more than 40% in 2009. A survey in 2010 stated there were 1,728 femicides across 18 Mexican states. Many preexisting statutes at State and City level have been amended to match the new federal law, which was credited to Felipe Calderon in 2007, then President of Mexico. Calderon sanctioned the first official law pertaining to Domestic Violence, called “General Law on Women’s access to a life free of Violence” to equality and nondiscrimination.

Little has improved in Mexico dealing with domestic violence, or abuse by known attackers, or strangers. Rarely are women protected by authorities. If protests or restraining orders are filed, they are never acted upon.

Feb. 2013, Senator Angelica de la Pena spearheaded a call to action against the ongoing Femicide phenomenon. Within Mexico alone 67% of women have been the target of crime. Most women are encouraged by Church and medical facilities to remain quiet. If families want to report a missing woman or girl, they have to wait 72 hours before reporting it, a time frame that puts women and girls at risk.

There are 16 Domestic Violence Centers in the Federal District...all in cities and out of reach for the rural barrios. Femicide is punishable by 20 to 40 years, but very few sentences are passed down or even investigated. Yet, there are many women serving time for killing their abusive husbands.

At the Tepehua Centro Comunitario, in the Barrio of Tepehua, 750 women went to counseling through the year of 2012, for sexual and family abuse in general. Police are barely visible in the area, and complaints mainly ignored by local officials. The Tepehua Center gives the Women the support they need, but support for Mexico’s greatest asset...women, should come from the government itself, as it became law in 2007, that a woman had the right to a life free of violence.

A politician once wrote, “If Mexico doesn’t take care of its greatest asset, its women, Mexico will implode.” I think he was right.