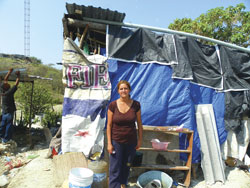 In the following, printed in the Habitat International Coalition, June 2013: “World Charter on the Rights to the City.” Neilson Saule, Jnr. stated, “According to United Nations statistics, the degree of urbanization has now surpassed the 50% mark. In 2005, the population living in cities was already 3.2 billion, with another 3.2 billion living in rural areas.  It is estimated that in 2050, the world’s urbanization will reach 65% with about 45% living in poverty, most of the population explosion taking place in rural areas, shanty towns and slums.”

In 2006, Enrique Cortez said “The right to the city makes sense, but only if the right to inhabit the rural areas in dignity, exists alongside.” Fareed Zakaria on CNN G.P.S. Aug 25th 2013, discussed Urbanization of Cities World Wide. Taking a grim look at Cities and Suburbs colliding in 2050, he suggested that 84% of the people will be living there, most in poverty.

Mexico City. 2008. The Promoting Committee made public the process of the Mexico City Charter for the Right to the City, a complex approach to Human Rights. “Democracy will not exist whilst poverty, inequality, exclusion and injustice prevails.” The objective being that all persons have the right to live in dignity.

Much brain storming, a lot of hours and paper work, went into a Charter that has never been fully implemented. Habitat Tepehua, a brain child of the Tepehua Community Center, came about because of the desperation of mothers living in lean-to’s in the rainy season, or shacks with roofs that leak or partially finished shacks. It is easier to live in poverty in the dry season, in spite of lack of water. In the rainy season, when water is in abundance, generally there is nothing to store it in.

The Tepehua Center took requests from people in trouble due to lack of adequate shelter from rain. Donations were collected, one house at a time repaired, using local men for free labor. Pulling men into preserving their village, insisting they stand up and be counted. For the indigenous people of Tepehua, and those of mixed heritage, owning a piece of land makes them rich indeed. They would rather live in a tent until they made money to start building their own home, than give money to landlords.

The rainy season brings disease, scabies, parasites, congestion in the infants and children, flu and conjunctivitis. It is spread through families because most have no means for hygiene, no running water. No toilets, which means human and animal waste mixed in the mud of the streets is taken into the homes on the bare feet of the children, who save their good shoes for school.

The free Clinic at the Center quickly runs out of medicine, especially over the counter antibiotics for children and adults.

These medicines, usually donated by our neighbors in the north, take a while to get here. Couriers have to be found to bring them over the border. A solution would be for civic-minded people here in Chapala to add a few over the counter remedies to their shopping list once in awhile and donate to the Center’s Clinic. If you have contacts in the medical profession or pharmacies, ask them to help for Free Clinic of Tepehua. These barrio babies have no choice: their inheritance is poverty. That can be changed in time with education. But for now, they have the right to the city, they have the right to live in dignity, and they have the right to build. The Mexico City Charter of 2008 says so. If you would like to help, please contact the author.