“The Unkindest Cut of All” 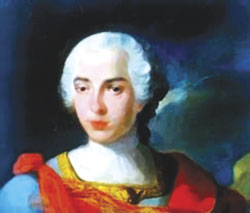 Viva ilcoltello! This was a frequent cry from audiences in Italy during the 18th and 19th centuries. It means “Hurray for the knife!” and refers to castrated opera celebrities. There was a Church ban against women singing in the choir, so boy sopranos were used. Castration solved the problem of their voices changing. The Italian is castrato in the singular and castrati in the plural. When opera became the rage in Europe, the practice was adopted to produce sopranos for the stage.

Voice change in boys is associated with other secondary sex characteristics, so castration produces a whole set of modifications. The vocal cords don’t grow in thickness and length, so the soprano range is maintained. The height of a castrato will be greater, the limbs longer, the hips wider, and the shoulders more narrow. The face will be softer, with no facial hair. The ribs will be longer, which produces a greater lung cage. Castrati were famous for their powerful voices and were able to sustain a note for a full minute.

Tens of thousands of boys were subjected to castration over a period of a couple centuries. Today it would be criminal mutilation. This was done usually between the ages of ten and twelve. It was extremely painful, so the boy was given opium, with no medical understanding of the proper use, and many died from overdose. Another method was to pinch the jugular to knock the boy out, but this, too, sometimes resulted in death if done too long.

Poor parents frequently offered their sons for castration, hoping they would achieve operatic stardom and wealth. That was rare, because if a boy were untalented before castration, he would be untalented afterwards. Castrati were the higher voices of Church choirs all across Europe, including the Sistine Chapel.

Those few who became opera stars were wealthy and received much adulation. But the great number led unhappy lives as caricatured objects of derision. They were called “capons,” a castrated rooster. They were oddly built and had high voices and the Church forbade them to marry, because they could not reproduce.

A castrato’s boyhood was strict and rigorous, with hours of music study every day. His voice demanded special training techniques and a cadre of voice coaches evolved specifically for castrati. They learned to do vocal embellishments, called coloratura, marked by agile runs and leaps and elaborate ornamentation of a melody. They thrilled audiences with a virtuosity no female singer could match, and certainly not the lower male voices.

A seeming paradox is that the castrati had great appeal to women and affairs were common. Along with keeping a boy’s voice box, a castrato also had what is called an “infantile penis.” Endocrinologists say that with the lack of testosterone, there could not have been a lot going on. Most of a castrato’s virtuosity would have been confined to the stage. It’s more likely that their sex appeal was the “groupie” effect, as with any celebrity.

The most famous of them all was Carlo Broschi, better known by his stage name of Farinelli. He was adored in London. King Louis XV of France gave him his portrait set in diamonds and 500 gold coins after he sang for the royal court. When he went to Spain the queen enlisted him to sing daily for King Philip V, because the queen’s doctor believed Farinelli’s singing would be therapeutic for the king’s acute mental depression. Farinelli was a royal favorite in Spain and became influential. He never sang in public again, and when he returned to Italy to retire, he was a very rich man.

The stardom of the castrati began to wane with Mozart and Rossini. For the tastes of both composers, the voice of the castrato seemed “unnatural” and they preferred the mature female voice. Italy outlawed castration in 1870, so we will never know the musical beauty that stimulated the opera audiences of that era.

The last castrato was Alessandro Moreschi, who died in 1922. He sang in the Sistine Choir and was the only one to ever make sound recordings. They are only of historical interest, however, because the recording was primitive, he was already too old, and he was never that talented to begin with.

One critic lamented the end of an extraordinary musical era by writing, “Although it is a  triumph for morals that humanity is no longer subject to this shameless castration, for art it is a misfortune to be deprived of the magnificent voices.”