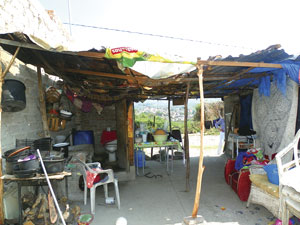 Although the Author strays away from Profiling Tepehua Barrio, she is trying to show that the trap of poverty and all that comes with it, is the same in any corner of the world. Poverty is Tepehua. Tepehua is everywhere. India, Thailand, Kathmandu. Even to the wealthy neighbors of the North, where it is frankly worse. Here in Mexico, you know the enemy, in the North you do not.

Tepehua Centro Comunitario is a world within its own walls. It is a world of problems, challenges. A place where those that live in cardboard or plastic homes, can find common ground with those who have cement walls and running water or electricity. The educated and the illiterate, every shade of brown.

What they have in common is poverty.

Every Barrio has a pecking order, but when you bring people together in a mutual quest to help the community as a whole, this fades...almost, but not quite. The educated and light colored skin, will always have the upper hand, the finger on opportunities.  Although most Mexicans will say there is no racism in Mexico, sadly they are wrong. Most Mexicans will not admit to knowledge of Afro-Mexican.  The heritage of which goes back to the Spaniards, who bought their black slaves to most parts of Mexico from the North to the South, and left them. These groups formed Barrios and then intermarried with the native Indian. Barrios ignored by the Government, who would not recognize their existence.

With a population estimated a little over a hundred million, is there significant ethnic diversity to merit racism in Mexico?

Ahmed Muhammed, who spent elementary, high school and college years in Mexico, states: “It is difficult to find a reliable source for the exact black population of Mexico, because all legal documents such as birth certificates, do not include racial information only nationality. The percentage of Mexicans with African ancestry is higher than people imagine, because they will also deny it.”

According to Church records, there were more black people than Indians in most Cities, black slaves were bought in to replace the deficit of Indian slaves who were dying in great numbers, due to disease, murder and mistreatment by Spanish Conquistadores during the 14th,15th and 16th centuries.

Ruben Navarette Jr., CNN contributor, wrote an article in 2012 about ‘In Mexico, Racism hides in plain view”. Not just black versus light skin, but religion. The migration of Jews began in 1519, when they were forcibly converted to Catholicism and called Cripto-Jews.

It wasn’t until the 19th century, practicing Jews were allowed into the country. This is a column of its own, later.

Colonial records show 200,000 African slaves were imported into Mexico by the Spanish in the 16th and 17th Centuries to work the silver mines, sugar plantations and cattle ranches.

After Mexico’s Independence, the needs of the Afro-Mexicans were ignored.

Alexis Okeowo, a black journalist in Mexico City stated. “The notion of race in Mexico is frustratingly complex. Many have claimed to have African blood, but still discriminate against their darker countrymen. Black Mexicans complain such bigotry makes it harder to find work, regardless of the level of education they have.”

Afro-Mexicans and Indians are among the poorest in the nation, some living in Barrios well out of reach of schools or hospitals. Mexico’s Government released a study in 2008, under pressure from activists, that confirmed Afro-Mexicans suffer from ‘institutional Racism’, or as historian Ted Vincent called it, “Mexico’s Racial Amnesia.”