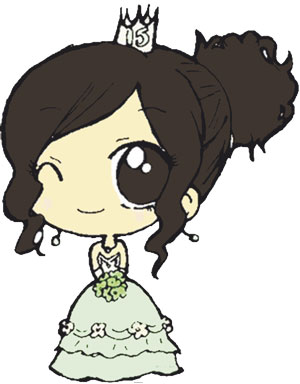 We could learn a lot about life from Mexicans. It seems every major moment of their lives are celebrated.  Births, baptisms, confirmations, graduations, even death has a way of celebrating a life.  There is one celebration that is a moment that outshines most in the life of a young woman’s.  Sometimes,  even more stellar than her wedding.  And that is her quinceañera, the celebration of her 15th birthday and her debut as a woman. (I say this because in Mexico, people are married twice.  The legal marriage is performed at courthouse. Then, if they want, couples can opt for the religious wedding at the church.) I have had the honor of attending a few quinceañeras and have experienced them with wonder.  Each has been slightly different, but the most recent one was very special.

There are several parts to a quinceañera, starting first with the parents and god-parents worrying about the cost!  This event is steeped in very meaningful traditions. Some of the families make subtle changes, but most remain fairly traditional. But planning a quinceañera here in Mexico would be equivalent to a large wedding in the USA.

Traditionally, prior to age 15, girls did not wear make-up or dance in public.  (Family events are an exception.)  Each piece of the quinceañera has it’s own significant meaning. A Catholic girl’s day will begin with a ceremony at her church for a thanksgiving mass. Accompanied by her parents, god parents and a “court of honor”—a group of her peers, damas y chambelanes,  girls and guys that are close friends of hers—ranging to as many as 14 couples! Gifts are given, rosaries, or a locket with the Virgin of Guadalupe and the honoree is presented with a tiara.  The tiara is a symbol that to her immediate family she will always be a princess.

The court of honor then goes to the reception where the party begins. At the most recent event, the young lady wore a lovely full-length ball gown, and all the men wore shirts that matched its color. The tables were decorated, and balloons adorned the dance floors, tables, and entrances.  Food was plenty along with drinks.  Gifts were collected, and once the guests ate, the ceremony began.

First the young lady sat alone in a chair on the dance floor.  She was holding a doll wearing a dress that matched her own gown. A friend came out and changed her shoes, giving her the first pair of high heels that she would wear as a woman, symbolizing her maturity. Then another person came, and placed the tiara on her head.  As a mist surrounded her, the band played special music.  Her mother then came, and took away the doll after exchanging embraces. The chair is then removed, and a waltz began and she danced her first public dance with her boyfriend, and then with all her male relatives, a time honoring the family. Then the rest of the family came to the dance floor and danced together—all ages from two to the grandparents.

Later there was cake cutting and toasts, and more dancing and drinking. This was the last quinceañera for the family with six daughters and one son and her mother smiled in relief and her eyes were filled with the tears of pride. As we left the party, I was filled with a wonder at having shared such a meaningful moment in this young lady’s life.

I thought back to my own 15th birthday. I have no memories. Traditions, I think, are a good thing.