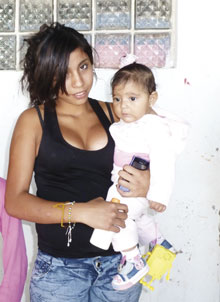 Thoughts of responsibility at age ten through 16 are non-existent in barrios like Tepehua. Very few young are looking into the future, wondering where they are going or what heights can they climb. They have no role models. They do not dream. What is the point? They can Love, but they cannot Dream, and as sexuality urges them forward, they slowly slip into the trap of poverty on an endless road to nowhere. They are left behind.

She was only sixteen and a drug user. Became pregnant with twins and lost them after six months of pregnancy. A blessing? One year later she was pregnant again and her water broke at eight months. As she labored, friends took her to some clinics but they wouldn’t see her or take an echo. So they joined the line at the free hospital in Guadalajara. Once admitted, within the hour she had her baby. The baby was put into an incubator and the mother released just a few hours after the birth...which is the usual practice. Women have their babies and the same day they are home.

At eighteen Maria met her 29-year-old lover. Her baby is now one year old. He has fathered many babies around the barrio. Maria is now two months pregnant again, and her man is prostituting to older gay men to make money. Money that is not for Maria or any of his children. He has left her, and Maria at two months pregnant is dancing nude at a bar to pay her rent. These girls had no chance from day one. Their education stopped quickly if they had any at all. Their opportunity to get off the hill and to find a trade was nil.

Poverty breeds abusers. A single mother of one eight-year-old child, after a long abusive relationship, found herself alone with a child she hated.  She hated herself and her ex-husband and the child who was holding her back now that she was free. She even went to DIF to find help because she thought she might kill her child. In the Tepehua Community Center, she found she was not alone, and after a few sessions learned it was not the child she hated, but what she had allowed her man to make her become. It is still work in progress, but she will make it because of basic education and group therapy.

A mother in her late thirties has carried around her Cerebral Palsy daughter for nineteen years. Rigor mortis has set in, the child was never turned over in her bed, her body is fixed in one position. Bed sores and ulcers. She is fed with a tube directly into her stomach and now her mother is crying out for help...she has no more resources, and the government will not help her. The Tepehua Free Clinic is trying to get this vegetable child into an establishment, so the mother can finally get peace. But how she loves her child! If there is a God, He is sleeping.

Tepehua is not all doom and gloom; there is a great deal of happiness there too. Happiness with very little. Hovels bathed in love and tight family groups, pride in endeavors and gratitude for everything they get. Large functional families and those that put the “fun” in dys’fun’ctional. Like Joann, who lives in a lean-to with her husband and four children, sharing one bed with a half dozen cats and three dogs. With a hoard of very contented fleas. Happiness? They are breaking ground behind the lean-to so as to build a home...an 8x8x8 breeze block home with a corrugated tin roof. No utilities, but it is theirs.