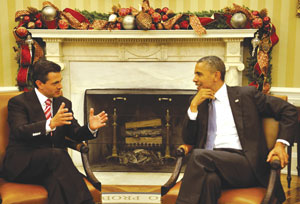 Now, if you drive through Guadalajara any day of the week you will see hundreds of upscale restaurants and thousands of late model vehicles (many of them made in Mexico)…and fewer and fewer “rambling wrecks” that were the subject of jokes not so many years ago. Let´s put some hard numbers to this new middle class.

The Organization of Economic Cooperation and Development (a “club” of 34 developed economies) based on median incomes now considers Mexico to be 50% middle class. Surveys of Mexicans themselves indicate that 65% of them now see themselves as middle class.

Immeasurably important is the drop in the fertility rate. Mexican women in the 60’s on average had seven children, and now they have slightly over two. That means typically a family of four instead of a family of nine. That means a lot fewer mouths to feed, and at the same time, the average worker is earning more money. Adjusted for inflation, the GDP—Gross Domestic Product—per capita has increased from $7,357 USD in 1990 to $13,928 USD in 2010, according to International Monetary Fund data. That is a real gain of 89%!

Take a look at just one of Mexico’s booming industries: Aerospace in Mexico has expanded on average at 17% a year since 2005, according to ProMexico, the Mexican federal agency that promotes trade and investment.

States that have led the way in aerospace include Baja California, Chihuahua, Nuevo Leon and Queretaro. And the action in aerospace is accelerating. For example, Bombadier recently announced their decision to open a plant in Queretaro where they will build the exteriors of the popular Learjet 85.

Actually, the aerospace industry now employs about 32,000 people in 16 Mexican states, although, according to the Mexican Aerospace Industry Federation, over half the jobs are in Baja California. The Department of Economic Development for Baja California counts 53 different companies that employ nearly 14,000 people in a wide range of operations, located mostly in Tijuana and Mexicali. The latest study released by Tijuana’s Economic Development council showed 7,313 aerospace jobs in Tijuana alone, a 36% increase since 2006.

Lots of things have happened in Mexico in the past 12 years since President Peño Nieto’s party, the PRI, last held the presidency. Nieto and his party inherit a revitalized Mexico, a nation that is in a period of dynamic growth, the result of appropriate decisions by committed leaders in both government and industry.

Mexico now ranks among the most open and competitive nations in the world. Trade makes up a bigger portion of Mexico’s GDP—63%—than of any other large country including the U.S. and China. And Mexico is steadily attracting global investors, rivaling Brazil and China as a location for foreign investment. Factory-made goods make up the bulk of the country’s trade, and this helps fuel economic and job growth in the US, particularly along the border, because goods manufactured in Mexico for export have a much higher percentage content that is “Made in America”—40%, compared to 4% for China, 3% for Brazil, 2% for India.

(Ed. Note: This is the last article the late Robert Kleffel wrote for the Ojo.)