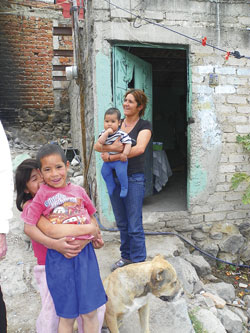 Executives of Human Rights Watch sent out a 92-page report on “The Second Assault,” outlining “the disrespect, suspicion and apathy that rape victims encounter from public prosecutors and health workers; also exposing pervasive impunity for rape and other forms of sexual violence in states throughout Mexico.” Kenneth Roth stated: “Pregnant rape victims are essentially assaulted twice, first by perpetrators, then by officials who ignore, insult and refuse them legal abortions.”

When victims apply for legal abortions they are sent from one official to another, one clinic to another, supposedly to “be sure of the pregnancy,” until they can then say it is too late, because it is over 12 weeks. Cost of a legal abortion is ten thousand pesos.

In most States, pregnant victims have the right to request a legal abortion; however, when victims approach authorities with the request, they are met with insurmountable obstacles. Mexico’s legal framework does not adequately protect women and girls against sexual violence. A number of states do not view spousal abuse as a criminal offense.  Human Rights Watch also stated, “Girls are even less protected than women under the law.”

Most state penal codes define incest as sex between parents, children and siblings as consensual, and penalize underage victims the same as adults, making abortion in the case of a pregnant child illegal. Meaning, as Mexican law defines incest as consensual; therefore it is not rape. In most of the states in Mexico, age of consent is twelve, Mexico City fourteen. So statutory rape in much of Mexico applies to those too young to become pregnant. Complicated laws have so many loop holes, girls and women have long learned to remain silent, and silence implies consent.

Sometimes, the law is not implemented, for the good of a victim. One young Tepehua mother was victimized so badly by her husband on a daily bases, as were her children, that she poured gasoline on the bed and burnt him to death when he was in a drunken stupor. She was never indicted. She didn’t entirely get away with it. She was again victimized by the village, and lived in isolation.

Another’s husband was always in jail, but every time he came home she would become pregnant. He is now gone for good, and she is a squatter on the mountain of Tepehua with four children. Unless her children get an education and change the life of the family, they are doomed to live a life of ignorance and degradation. No matter how poor the whole village may be, there is a pecking order. The village victimizes their own.

Because of the marriage laws of the Church, there is no divorce in Mexico. But if a couple can prove they have been separated for five years to the Courts, they can divorce and remarry, but not in the eyes of the Church. So, many of the couples in Tepehua are living together and are not married. If the husband moves out and another moves in, it is living in “sin.” Because they are not legally married they cannot get into the few government programs.

This column would like to investigate more about the Poverty Trap, so the Ojo’s readers can understand exactly how this can happen. So many times Northerners will say, “I was born into poverty...look at me now!” The trap is different here in Mexico, it is one-way once you are ensnared.

Future columns will picture for you the personal stories, defeats and victories. It is a tapestry in pain, love, victimization and victory.