THE GHOSTS AMONG US 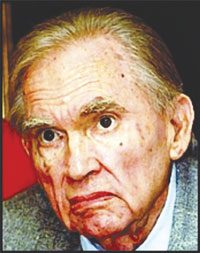 George Wallace was a good man, a Methodist, no less, and a man ahead of his time. But he made a pact with the Devil. The Devil delivered and then exacted his price, including the bombing deaths of four black Sunday School girls in Birmingham.

It’s hard to think of Wallace today in any terms other than politics at the meanest level – hypocrisy, opportunism, and the unbridled exploitation of racism. He fanned a fire of racial hatred for which countless men, women, and children paid a dreadful price, including death. I’ll never forget being in Berlin, Germany, and seeing the front page headlines and pictures of the beatings and police attack dogs. But it was not always so.

Wallace began his political career at the age of 27 as a state representative. Ray Jenkins, of the Alabama Journal, said, “He had a reputation as something of a ‘socialist.’ He was very progressive, very liberal.” After serving in the legislature, Wallace became a state judge.

J.L. Chestnut was born in Selma, Alabama and studied law at Howard University Law School. He returned to become Selma’s first black attorney. He said, “Judge Wallace was the most liberal judge that I ever practiced law in front of. He was the first judge in Alabama to call me “Mister Chestnut” in a courtroom. I was almost shocked to hear that, it was so unusual.”

In his first run for governor, in 1958, Wallace ran against John Patterson, a candidate who was the most racist imaginable. Patterson had close connections with the Ku Klux Klan. Wallace, on the other hand, advertised that “I want to tell the good people of this state, as a judge, if I didn’t’ have what it took to treat a man fair, regardless of his color, then I don’t have what it takes to be the governor of your great state.”

Wallace lost badly and he was devastated. Being governor had been his lifelong dream. He understood what had happened, and became a segregationist extraordinaire. He said, “I’ll never be ‘out-niggered’ again.”

The early 60’s saw civil rights sit-ins and freedom rides spread all across the South. Angry reaction from whites added more fuel to the Wallace fire. He said, “President Kennedy wants us to surrender this state to Martin Luther King and his group of pro-Communists who have instituted these demonstrations.” In the 1962 election, Wallace won the governorship in a landslide.

Asa Carter was the Wallace Finance Director. He was tied with the Ku Klux Klan and could keep them quiet or get them riled up, as needed. Carter’s followers had gone out and randomly castrated a black man. Carter wrote Wallace’s 1963 inaugural address, which included the words “. . . I say, segregation now, segregation tomorrow, and segregation forever.” A storm of racial violence followed in Alabama.

In May of 1972 I drove a school bus from Beaumont, Texas to Houston for a field trip. The bus was filled with 100% black students, because I taught at a black school. I also served as an NAACP Youth Council advisor. A couple of the kids had portable radios on the bus. We had just pulled into the parking lot of our destination when a news bulletin interrupted to announce that Governor George Wallace, now presidential candidate, had been shot. A black boy behind the driver’s seat said, “I hope he dies.” I did not comment.

Wallace was paralyzed from the waist down, but ran for governor again, for a total of four terms (16 years). Also, his wife Lurleen won in one election on his behalf because of term limits. Wallace changed after the shooting and said he was a “born again Christian.” He apologized for his racist past as a segregationist. He said he had sought power and glory when he needed to seek love and forgiveness. He said he was wrong to stand in the schoolhouse door to block a black university student: “I was wrong. Those days are over, and they ought to be over.”

Wallace made a record number of black appointments to state positions in his final term as governor. J.L. Chestnut, the lawyer and activist, said, “We can forgive, but we cannot forget.”