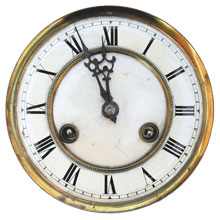 My grandma Emily (Emily Danford King) was born in 1873 in Wentzville, Missouri. This was thirteen years before Custer’s Last Stand (1886) and eight years before Wyatt Earp shot his way into history at the Gunfight at the OK Corral (1881). Mary Todd Lincoln, widow of the beloved president, died in 1882, the same year Missouri outlaw Jesse James, a few counties away, had been shot in the back by “the traitor Bob Ford.” In 1882 my grandma was a little girl, nine years old. Incidentally, Jesse’s brother Frank James was still alive when my dad was born (Frank died in 1915).

My grandma’s father Ambrose (Ambrose Grandaddy King) was born in 1837, during the time the United States was at war with Mexico. The United States itself was just a little over sixty years old. My grandma, born before Custer’s last stand, born before the Gunfight at the OK Corral, born only eight years after the Civil War was over, often rocked me to sleep in her old soft lap when I was a baby. I cried like a baby when she died in 1961. We are not far removed from what seems like so long ago and far away.

The Biblical “span of man” is 70 years, according to the King James Version of Psalm 90. (Methuselah purportedly lived to the very ripe old age of 969… perhaps he followed to the letter those incredibly strict dietary rules of the early Hebrews.) Taking the Biblical span of man, 70 years, and taking the current age of the United States (2013-1776 ) at 237 years, the lives of four people, laid end to end, would contain more time (280 years) than the total history of the United States!

Years ago I used to teach a survey of Western Literature beginning with Homer’s The Odyssey (around 800 BC). On the first day I would stand before my class and announce that their 40 lifetimes (each of threescore and ten), were they laid end to end, would cover all of the time that had elapsed since the early Greeks and Homer, 800 BC to the present…this one little class. Of course to college students what really caught their attention was the notion of being laid end to end.

Back in 1964 my favorite professor told me he had known a woman whose best friend, as a little boy walking with his mother, had seen Samuel Johnson, a famous British man of letters, strolling through the streets of London in 1780! Professor Cordell in 1964 was 69 years old. When he was a young man he had known a woman 85 years old whose best friend was her grandfather. So, let’s follow that one back for fun. Cordell in 1915 was 19 years old. The woman, 85 then, would have been born in 1830. Her grandfather, assuming he was 55 when she was born, would have been born in 1775, and as a young boy could certainly have seen Samuel Johnson in London in 1780.

A colleague when I was a college professor told me he received his Eagle Scout award in 1943, and it was presented to him by an officer of the Confederate army…wearing his Civil War uniform! I still have my great-grandfather’s sword awarded (along with a commission to second lieutenant) to him—Ambrose Grandaddy King—for bravery after he captured two rebel soldiers on Lookout Mountain, one hard autumn afternoon in Tennessee, back in 1863…not so long ago.