My Interpretation of Mexican Traffic Patterns 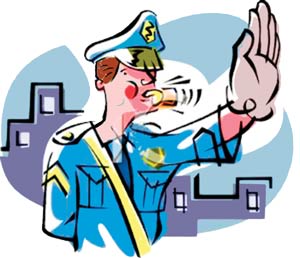 On first glance, most of the written Mexican traffic laws are very similar to those of our native countries. But it is the unwritten traffic rules that I have come to understand that are much more important to learn. Stop signs in Mexico seem to be mere suggestions. The car approaching the intersection the fastest is the one that goes through the intersection. I never trust that anyone will actually stop. Stop signs also disappear. At an intersection near where I volunteer, is a four way stop…until someone knocked over one sign…and someone else cut the other sign--sawed it off next to the cement!

Mexicans are the most patient people I have ever met. Yet put them behind the wheel of a car—and they seem to lose all sense of patience. You’ve all heard the sixth car in a line of traffic at the stop light start honking the instant the light turns green. The other day, I saw an ambulance, parked in traffic. They were obviously attending to an emergency in the building they were parked next to. But the cars parked behind the ambulance took turns blasting their horns impatiently.

Then there are the hit and run drivers. These are not limited to Mexicans. I saw a gringa back out of Salvador’s parking lot and smash in the side of a car parked along the road. She got out, looked at the damage to her car, and drove off. My husband and I looked in amazement as we passed by the car with a caved in panel! Another hit and run happened to a friend of mine. She was in traffic behind a police car, and the police car backed into her…and took off. I kid you not.

One Ways: There is no such thing! Oh, yes, there are streets that are marked for one way. But most seem to ignore them. Yesterday, I watched someone back down our one-way street in reverse. After he passed my parking space, I started to pull into traffic, and realized he was now driving forward! Why was he driving in reverse?

I had to wait to get out of my car one day because there was traffic coming the wrong way down the one-way. Believe me: We all must look both ways, even if we are driving down a one-way.

Two Ways: Well, not really. There are streets in Lakeside that are so narrow, that two cars cannot pass. So as we negotiate the street, avoiding children, and dogs, and the occasional burrow, the delivery trucks and pickup trucks, we need to guess who will move over and allow room enough to pass.

There are vehicles that always can stop traffic. Garbage trucks—but they usually pull over to let you pass when they reach an intersection. Gas trucks: All traffic must cease to move during a delivery. These, I understand. I’m the patient one in line. But the ones that make me smile and shake my head are the “conversation stops.” That’s when the person one or two cars ahead of you, stops dead in traffic to talk to someone on the sidewalk. Or even funnier yet, they yell out to the shopkeeper, and the shopkeeper runs out with their purchase. It’s when the buyer doesn’t have correct change that it really bothers me!

Yet for the quirky customs, I still find courtesies I didn’t see in the USA. Mexicans actually allow you into traffic, cross crowded streets, and merge. In all other cases, I suggest driving defensively.