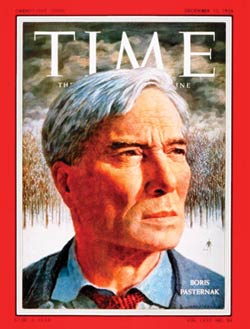 Those who managed to tear their eyes away from Julie Christie long enough to pay attention to character development probably noticed that Zhivago was not only a doctor but a poet, too. And let’s not forget that when Pasternak won the Nobel Prize for Literature in 1958 for Doctor Zhivago, the Nobel committee first noted “…his outstanding achievements in verse.” Those achievements are most appreciated in his native Russia, of course, where public poetry recitals can attract thousands of listeners. But translating Pasternak’s poetry into English has been devilishly difficult. Until now…

I hold in my hands an inscribed volume published last year titled My Sister Life and The Zhivago Poems. These Pasternak poems are rendered convincingly by my friend, a gifted translator, Professor Emeritus James E. Falen, University of Tennessee, Knoxville. He’s captured the rhythm and much of the rhyme or near rhyme that characterize Pasternak’s lyric poems. Jim modestly hopes that “…the ghost of the Russian poetry may be fleetingly glimpsed, a distant echo heard.”

But before listening and glimpsing, let us recall for our younger readers exactly what happened when the Nobel Prize was announced. Boris sent a telegram to the Swedish Academy: “Infinitely grateful, touched, proud, surprised, overwhelmed.” But the Communist Party was not amused because Doctor Zhivago was published in the West and was viewed as critical of the Soviet system. The KGB knocked loud on Pasternak’s dacha door. He was threatened with arrest, and the agent also vowed to send his beloved mistress to the gulag (forced labor camp). And if Pasternak traveled to Stockholm to accept his Nobel Medal, he would be refused re-entry to the Soviet Union.   Thereupon, Pasternak sent a second telegram to the Nobel Committee: “In view of the meaning given the award by the society in which I live, I must renounce this undeserved distinction which has been conferred on me. Please do not take my voluntary renunciation amiss.” By reply, the Swedish Academy announced: “This refusal, of course, in no way alters the validity of the award.”

It was a shameful and embarrassing episode in the annals of Soviet Communism, and the government lost both face and prestige in international affairs. Pasternak regained his reputation, and Doctor Zhivago was finally published in Russia and the movie was finally seen.

But enough! Let’s return now to the famous ice palace with Omar Sharif and Julie Christie. Strike up Lara’s Theme on the balalaika and pass the vodka!

It snowed and snowed throughout the land/On every road and turning.

A candle on a table burned /A candle burning.

The way in summer midges swarm/To fly toward the flame,

The snowflakes flew against the door/And round the window frame.

The blizzard sculpted on the glass/Soft arrow shapes and circles.

A candle on a table burned/A candle burning.

And in the room the shadows lay/Across the lighted ceiling,

And from the bed two slender shoes/Slid off and clattered down.

The night lamp shed its waxen tears/Upon a scattered gown.

And all was swallowed in the mist/The white and snowy murk.

A candle on a table burned/A candle burning.

And from the corner came a draft/And longing raised aloft

Two wings that, like an angel, cast/The shadow of a cross.

It snowed that year the whole month long/On every road and turning.

It’s a whistle that howls in the veins,

It’s the crackle of ice under pressure,

It’s the leaf-chilling night in the rain,

It’s the sweet pea all choked in the fields. . .