"Seductress of Minds and Bodies" 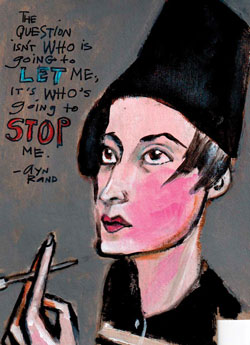 Ayn Rand’s sex life was consistent with her political philosophy. She sought only selfish gratification. She called her inner circle the “Collective,” an odd name. She was from Russia and preached rugged individualism, perhaps in reaction to the Communist Revolution – but in reality she demanded collective obedience. She qualified as a cult leader: (a) she was venerated like a saint by her followers, (b) her followers believed everything she said, and (c) sexual exploitation is characteristic of cult leaders.

Rand seduced Nathan Branden when he was 25 and she was about to turn 50. Typical of cult behavior, Ayn Rand called a meeting with Nathan, his wife Barbara (also a Collective member), and Rand’s husband, Frank. Rand announced to Nathan’s wife Barbara and to her own husband Frank that they would have a structured relationship, with Ayn Rand and Nathan spending one afternoon and evening a week together for love and sex. All agreed, since disagreement with Rand was verboten.

By 1964, Nathan was 34 and had grown tired of Ayn Rand, who was now 59. He was afraid to end his affair with her, but began sleeping with 24-year-old Patrecia Scott. Rand found out, and called Nathan before the Collective. She humiliated him and put a curse on him: “If you have one ounce of morality left in you, you’ll be impotent for the next 20 years! Rand slapped Nathan across the face, fiercely – two times. Rand also expelled Barbara from the Collective, declaring her to be treasonous, because she didn’t alert Rand about Nathan’s affair with Patrecia.

Nathan, now fearful that he might be assassinated by other members of the Collective, moved from New York to Los Angeles.

In her books, The Fountainhead and Atlas Shrugged, the heroes are about as simplistic as comic book heroes. The difference is that unlike Hopalong Cassidy and Batman, Rand made egotism and selfishness heroic, and compassion for others a detestable weakness. Gore Vidal wrote in 1961 that “Ayn Rand’s ‘philosophy’ is nearly perfect in its immorality.”

Rand was a believer in free markets with no government regulation: No government except the police, courts of law, and the armed services. No regulation of anything by any government. No Medicare, no Social Security, no public schools, and no public hospitals. Just rugged individuals looking out for their own greedy self-interests, struggling to get rich, and not asking for help or giving help to anyone.

Alan Greenspan was a member of Ayn Rand’s Collective, and as Chairman of the Federal Reserve, his policies are largely blamed for the Meltdown of 2008.

Congressman Paul Ryan, former vice presidential candidate, is Chairman of the House Budget Committee. Ayn Rand inspires his budget. For example, his quest to get rid of Medicare.

This gained the attention of Mitt Romney, who embraces Rand’s belief that there are only producers and “moochers.” Remember his 47% speech? “I’ll never convince them that they should take personal responsibility and care for their lives.” It’s a classic Ayn Rand statement.

Ryan has spoken to the Atlas Society (named after Rand’s book) and told them of his devotion to her. He says Rand was the reason he got into public service. Ryan said that he gives out Rand’s books as Christmas presents and requires his staff and interns to read her work.

Ryan ridicules Social Security as a “collectivist system.” His earlier budget gutted a whole host of support programs for the middle and lower classes. He planned to use the savings to finance more tax cuts for the rich. Ayn Rand loathed altruism and helping others, and Paul Ryan reflects that. Ryan told the Atlas Society, “The fight we are in here, make no mistake about it, is a fight of individualism versus collectivism.”

Rand’s ideas have been dismissed by philosophers. Her economic ideas have been refuted by academic economists. And finally, the moral aspects of her philosophy have been rejected by the United Methodist Church. And remember the “Nuns On A Bus” who protested Ryan’s budget? They said, “We don’t like Paul Ryan’s idea of Catholic values.”

But the Tea Party loves her. And Ryan’s budget, based on selfish greed run amok, passed the House 235 to 193. Only four Republicans voted against it. Ayn Rand’s ghost remains among us in the form of a malignancy growing on human compassion and decency.