Canada and the USA 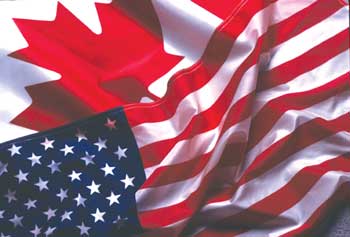 What are the differences between Canada and the US? Politics aside, there is history and there is climate.

It took a long and bloody war for America to win independence. However, Britain goaded the colonists, and Americans were willing, almost eager, to fight. Not so Canada. They held ties to two homelands, previous enemies. The French settled Quebec while the British built Ontario. Negotiation was paramount. The French dropped any claim and in 1867 the British North America Act peacefully created the Dominion of Canada, recognizing their right to self-rule. The name was shortened to “Canada.”

There were significant climatic influences as well. Too many Canadian settlers starved or froze during the harsh winters. They helped each other by leaving the door unbarred for anyone in need of shelter. When you do that, it’s wise to be friendly with local Indians.

Meanwhile Americans, whose treaties were repeatedly broken in Washington, built fortresses in striking position to weaken Indians as pioneers pushed west. It was under the guise of protection, but aggression led to bloodshed at the Battle of the Little Big Horn.

Canadians negotiate as if their Indians were a separate nation within Canada. The French in Quebec threatened to separate unless Canada negotiated with them too. Together they instituted a Universal Medical system that works for all. They also look after their poor, and they invite immigrants.

On both sides of the border, entrepreneurs recognized struggle as opportunity and flourished: dams for power, manufacturing. Bell Telephone was developed in Canada and popularized in America where industrialization took hold, and Edison lit up the world.

The shift from east to west was, in both countries, staggeringly difficult but compelling. The Canadian west was settled much the same as the history in the US west, e.g. oil, cattle, lumber, mining, gold...and the railroad connecting markets with natural resources. But Canada has a tougher climate in which to develop. Regardless of what great finds there are, it’s always a costlier economic outlay. But great finds there were! The Northern Territories discovered the single greatest find of pure, gem-quality diamonds the world has seen.

US pioneers heading west helped each other, and it was successful, but not as much so as opportunity and greed, especially once Pennsylvania discovered oil, with Oklahoma, Texas and California following the westward trek. The two countries experienced many challenges in common, but the differences are powerful.

(1) Slavery was key to the economy of the US south while industrialization drove the northeast. Slavery was repulsive to Canadians, as well as most in the northern US.

(2) Canada’s wholesomeness has been a more successful strategy. Fair negotiation and honoring commitments are key because it will always come back to bite you if you don’t play fair. Americans were strong, clever and fast, especially with a gun. Canada’s good guy attitude is still in play. It was Canada who rescued some Americans held in Iran in 1979– it was simply the right thing to do for a neighbor.

At the heart of the difference is attitude. Canada chose community. Americans chose opportunity and reward.

For the most part the two countries balance each other well. For America, Canada is a reliable economic and political ally, and Canada benefits because Armed Forces are expensive. Canada buys American products while America needs Canadian resources. The two countries are like a strong big brother and a resourceful but gentler younger brother.

Looking back from today’s economic and political challenges, we can see that the “old west” style created problems. American taxpayers are tired of being fall guys for the rich and powerful. There’s a lynching party forming and we’d better hope Gary Cooper is the sheriff elected. The difference is critical if we want to retain our allies. And we do.

(Ed. Note: Kay holds dual citizenship. Born and raised in the US, she chose to live in Canada and flourished there. She is now retired in Mexico.)