Russian Poetry in the Golden Age 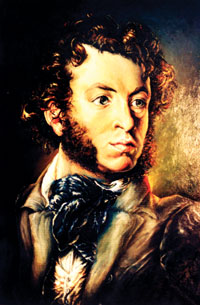 It was a time of enormous and varied achievements in the arts, the 1810s, 1820s and 1830s. St.Petersburg, the Russian capital at that time, was the focal point of advances in every conceivable art form. Enormous prestige attached to practitioners of the divine mystery we call art. The Russian love for dance and music was rivaled only by their love of poetry, which has no equal except in Ireland. And within the colorful aurora borealis of poetry there shown one particularly bright light: Alexander Sergeevich Pushkin (1799-1837).* Admired and quoted across Russia even today, Pushkin led the way creating a Russian literary language that successfully competed with French, the language of the upper classes. Best known for Eugene Onegin, Pushkin wrote over a thousand lyric and narrative poems, plays, essays, reviews, and extensive letters. Yet he was only 37 when struck down in a pistol duel over a beautiful woman—his flirtatious wife. Ever the romantic, his first student poem hung as a sign on a hospital wall: Here lies a student gravely ill/His only lot is to endure/So take away that useless pill/There is for love as yet no cure.” Trans. James E. Falen. Pushkin’s death-by-pistol was a national calamity. Over 30,000 admirers filed by the casket on a single day. One old man stood by the coffin quietly weeping. When the poet, Prince Viazemsky, asked him if he knew Pushkin personally, the old gentleman, tears streaming down his face, answered simply, “No, but I am a Russian.”

The so-called Pushkin Pleiad included Prince Petr Viazemsky (1792-1878). Advisor to Czars, mentor to Pushkin and “favorite of the Muses,” Viazemsky sported a wicked wit poking fun at the powers that be.

Do you need an explanation what the Russian god can be?
Here’s a rough approximation as the thing appears to me.

God of frostbite, god of famine, beggars, cripples by the yard,
farms with no crops to examine, that’s him, that’s your Russian god.

Then there was Nikolay Iazykov (1803-1847), an outspoken liberal in the Pushkin Pleiad who didn’t even shy away from disparaging the Czar, a dangerous thing to do.

The times we face are cruel, harsh. Stupidity’s enthroned in arms!

Next to Pushkin, Evgeny Baratynsky (1800-1844) was declared best poet of the Pleiad. He believed that imagination was the bridge between reason and emotion. A philosophical poet, he was also the most convincingly melancholic and romantic:

False tenderness from me do not demand/I shan’t conceal my heart’s sad chill.

You’re right, the lovely flame/Of my first love, has disappeared.

And when in vain I turn my thoughts/To your dear face and our old dreams:

My memories are lifeless./I gave my word, but I cannot keep it.

And who could forget Baron Anton von Delvig (1798-1831), one of Pushkin’s closest friends and a poet given to tender emotions, particularly to friendship and love?

Your golden curls, their fortunate disorder,

Your azure eyes, their greeting, as in dream,

Your lips’ sweet sound, if only in dissent,

Give birth to love with hopelessness together.

These fine poets and several more were sparkling talents in their own right who, in any other era, might have been considered major poets. But Pushkin’s brilliance outshone them all and the era is his. Pushkin personally admired these poets both as people and as writers. The Golden Age was their age.