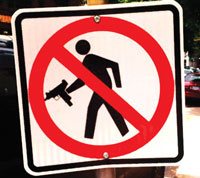 The monstrous killing of children provokes outrage among humanitarians, while it drives paranoid gun nuts into deeper defensive lunacy. It’s manifest idiocy to say we need guns for self-defense. If guns made us safer, we would be the safest country in the world, since there are 300 million guns among us. If you wrote insurance, you wouldn’t lower premiums for a household defended by a gun – you should raise the premiums, because a gun in the house increases liability.

For each time a gun is used in self-defense, it’s used eleven times for suicide, seven times in criminal assaults and homicides, and four times in accidental death or injury. That’s a record of only one time in every 22 events for the logic of self-defense, a percentage so low as to render the argument ludicrous.

The Harvard Injury Control Research Center has shown that even among cases where the killers claim self-defense, the gun was most often used in escalating arguments. And their use was both socially undesirable and illegal. This kind of self-defense received publicity in Florida two times in succession. The first was when George Zimmerman felt threatened by a black teenager, Trayvon Martin, who was purchasing candy while dressed in a “hoodie” in the rain. The second was when Michael Dunn felt threatened by the loud music coming from a parked car and then killed Jordan Davis, another black teenager. Both killers are claiming self-defense under Florida’s “stand your ground” law.

The Second Amendment is proclaimed the holy altar of gun worship. But that, too, is egregious mendacity. At the founding of our country, nobody had any idea of a national standing army. That’s why the responsibility was given to each state to maintain a “well regulated militia.” George Washington, as president, asked the state governors to provide him with 13,000 militia that he personally led to put down the Whiskey Rebellion and to enforce federal authority. Paranoid gun nuts believe the Second Amendment is intended so they can protect themselves against the federal government, when the amendment’s purpose was the exact opposite – to guarantee federal authority.

A Republican Chief Justice of the US Supreme Court, Warren Burger, was blunt. In an interview with McNeil-Lehrer, he said, “The Second Amendment has been the subject of one of the greatest pieces of fraud – I repeat the word ‘fraud’ – on the American public by special interest groups that I have ever seen in my lifetime.” His point was that there is no guarantee in the Second Amendment of private gun ownership; it only allows a “well regulated militia” to maintain the “security of a free state.” Nobody can claim the killer at Sandy Hook Elementary was “well regulated.”

There was a 66% decrease in the use of assault weapons linked to crimes after President Clinton signed the ban in 1994. Their number continued to dwindle until George W. Bush and the Congress allowed the ban to expire in 2004. When assault weapons again became available, they flooded into the drug cartels and Mexico’s murder rate went up dramatically. And assault weapons have been used in our own mass murders, including Sandy Hook Elementary. That’s their sole purpose, after all.

When we toss all the NRA talking points into the garbage dump, we are reduced to a simple fact: America is awash with guns. We have an astonishing 30 times the per capita gun deaths of France or Australia. Do Americans have darker hearts than Australians or Frenchmen? No, Americans simply suffer a cornucopia of guns not available elsewhere.

A preposterous NRA motto is: “Guns don’t kill people; people kill people.” This sounds much too smug and cute, because people use guns as efficient tools of death and 40% of purchases escape background checks – through gun show loopholes, for example. Now NRA chief Wayne LaPierre has expanded the “people kill people” slogan by adding video games and Hollywood. To hear LaPierre and his fanatics tell it, guns had nothing to do with the killings at Sandy Hook Elementary. The answer to protecting school children from “people, video games, and Hollywood” is more guns – yes, arm the teachers with guns! This is delusional insanity.

President George H.W. Bush wrote a famous letter canceling his lifetime membership in the NRA. He was offended that LaPierre obscenely labeled federal agents who had been shot and killed as “jack-booted thugs.” Bush was the victims’ boss. The NRA was obscene after Sandy Hook, and former Republican Chairman Michael Steele said he was “speechless.”

Wayne LaPierre doesn’t represent hunters and sportsmen. He represents the money lobby for gun sales and murder. Sandy Hook should finally, at long last, force Americans to denounce LaPierre’s delusions about self-defense, the Second Amendment, and his cute slogans, and say, “Enough!”