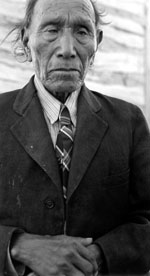 Thomas Morgan, the US Commissioner of Indian Affairs, wrote a review after the massacre at a South Dakota creek called Wounded Knee: “It is hard to overestimate the magnitude of the calamity which happened to the Sioux people by the sudden disappearance of the buffalo.”

The new railroads considered the great herds of buffalo to be a nuisance and kept guns on board. When a herd was encountered, the train stopped and the passengers were invited to shoot the buffalo from the train. At about the same time, a market developed for ground buffalo bones for fertilizer. They were shot by the millions and left to rot so the bones could be gathered later. Also, the six-shooter came along and finally gave the white man the advantage over the bow and arrow. The fate of American Indians of the Great Plains became irreversible.

Commissioner Morgan was devoid of empathy. Even a year before the Wounded Knee Massacre, Morgan wrote: “The Indians must conform to the white man’s ways, peaceably if they will, forcibly if they must. . . . The tribal relations should be broken up, socialism destroyed, and the family and the autonomy of the individual substituted.”

Black Elk had seen 500 soldiers on the move on December 28, 1890, and sensed that something terrible was about to happen, and it happened the next day. He said, “In the morning I went out after my horses, and while I was out I heard shooting off toward the east, and I knew from the sound that it must be cannon going off. The sounds went right through my body, and I felt something terrible would happen. I painted my face all red, and in my hair I put one eagle feather for the One Above.”

On his way, other Lakota men, a branch of the Sioux, joined Black Elk. A galloping rider came to them and reported “They are firing on our people!” The men promised one another the courage to fight, but when they got to the area, the soldiers were dug in and there were not enough Indian braves to dislodge them.

In the evening the soldiers left and Black Elk said, “And then we saw all they had done there. Men and women and children were heaped and scattered all over the flat at the bottom of the little hill where the soldiers had their cannon, and westward up the dry gulch all the way to the high ridge, the dead women and children and babies were scattered. I saw a little baby trying to suck its mother, but she was bloody and dead.”

Black Elk was a famous Lakota holy man, or shaman. He had witnessed the Battle of Little Big Horn at the age of 13, where they defeated George Custer. He was wounded while trying to intervene in the Wounded Knee Massacre. In the 1880s he toured with Buffalo Bill’s Wild West Show before returning to Pine Ridge, his original home in South Dakota, which had been established as an Indian reservation. In 1930, he began telling his story to the poet and historian John Neihardt and the result was Black Elk Speaks, an account of Lakota history and spiritual traditions.

Black Elk movingly reflected on the moment Red Cloud convinced him and others to surrender in the wake of Wounded Knee: “I did not know then how much was ended. When I look back now from this high hill of my old age, I can still see the butchered women and children lying heaped and scattered all along the crooked gulch as plain as when I saw them with eyes still young. And I can see that something else died there in the bloody mud, and was buried in the blizzard. A people’s dream died there. It was a beautiful dream.”

There are plenty of photographs of Black Elk in his native Indian dress, but the one in the white man’s coat and tie would surely be the one most pleasing to Indian Commissioner Thomas Morgan. The suit seems like a final triumph over Black Elk’s Indian soul.

In 1990, a century later, the United States Congress issued an official apology, expressing “deep regret” for the slaughter of over 370 men, women, and children at Wounded Knee Creek.

“At the center of the universe dwells the Great Spirit. And that center is really everywhere. It is within each of us.” – Black Elk