"…the geography of hope" 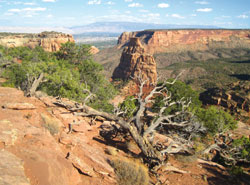 How does place—geography—affect us? I know that even as a young boy Colorado beckoned to me, loomed large inside of me, and I was determined even then to someday live in Colorado. After a couple of false starts in other states, I did finally move to Colorado where I lived longer than in any other state, and where part of me, near the heart, continues to live.

Wallace Stegner calls the American West the “geography of hope” and hope (and its sibling dreams) may indeed have had something to do with my longing. Oddly, it was not until I was in college that my father told me of his own longing for Colorado. He had actually been accepted into a Masters program at The University of Colorado, but the impending Second World War and a young wife put that particular dream on the back burner forever, no doubt, I think, replaced by other, and hopefully satisfying, dreams.

When I finally stopped sacrificing my own dream of place to the dreams of others, I moved to Colorado, still the state most dear to me; I lived for the most part in western Colorado, still the place to which I feel most connected. A couple of weeks ago I discovered John Scherber’s recent book, San Miguel: A Place in the Heart. (Some of you may be familiar with Scherber’s Murder in Mexico series, all set in San Miguel de Allende). Scherber had only lived in San Miguel for eight months when he began asking himself questions like: “What had I given up to come here, and what had I gained? What was my new role in the community? Was I an exile? An expatriate? Would I ever live in the States again? How did I react to Americans I saw here visiting? What had I done?”

Because the answers to many of these questions eluded Scherber, he began to ask others, and so he put together a collection of interviews that is “personal and anecdotal,” that illustrates “for a number of different people what it really means to make a change like this, the feelings and emotions it evokes, the economic and social realities that come with it, the challenges to old identities or the blossoming of new ones that are inevitable in a different culture.”

Scherber’s book is about dreams meeting reality, about reawakening to that ever-present reality which, after all, must ultimately be our home. This requires a lot of patience, tolerance, confidence, resilience, and acceptance, until this new reality—this new place—becomes, as his subtitle suggests, “a place in the heart.” Scherber set out to examine “the contrast between expectations and reality, and the personal changes that came about because of it.” I came to Mexico more because of person rather than place. I came here because I had allowed myself to be seduced by my own dream…which was to create a wonderful (and otherwise impossible) life for a lovely young Mexican woman and her three-year old daughter. I thought I understood her dream, but alas I little understood the dynamics of her complex subculture within the even much more complex Mexican culture at large.

Now I live alone, in a place—Lake Chapala—which I, for the most part, like; but now I must look at it as place and think about whether it is the place for me. Perhaps it also is, or can become, a “geography of hope.” I still long for Colorado, though. Only last week a woman in the mountains I have always loved told me in a card that Colorado still longs for me.