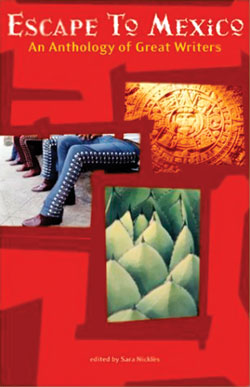 Mexico has long been a haven for writers from all over the world, and was/is for many of them what Paris must have been to the generation of writers that included such famous names as Hemingway, Fitzgerald and Dos Passos. Mexico has also had its own big-name foreigners who found it fertile soil for their literary fantasies, famous writers such as Tennessee Williams, Somerset Maugham and D. H. Lawrence.

However, a collection of short stories, Escape to Mexico—An Anthology of Great Fiction, has recently come our way, and the list of well-known writers who spent time in Mexico and later wrote about it is far more extensive than one might think. Smartly edited by Sara Nickles—who understands Mexico very well—her introduction immediately intrigues us:

“’Come with me to Mexico,”’ says a character in Anais Nin’s short story. “’I want to wander about a little and find out who I am.”’

Nickles’ introduction continues: Mexico has long been viewed not only as a place but also a state of mind. It is a land of possibilities and extremes, of passion and intrigue, a land where you can lose yourself or find yourself, depending upon what you desire. The characters in these tales are both seeking something special in Mexico and leaving something behind. . . Some are trying to forget sadness, others are pursuing an endless fiesta.

A partial list of contributors include Sherwood Anderson—author of Winesburg, Ohio and many other well-known works; Stephen Crane—best known for his novel The Red Badge of Courage; Harriet Doerr—novels Stones for Ibarra and Consider This, Senora, both written when she was in her 70s; Graham Greene—The Power and the Glory and The Lawless Roads; Patricia Highsmith —wrote The Talented Mr. Ripley and Strangers on a Train, both turned into highly suspenseful movies, the latter directed by Alfred Hitchcock.

Jack Kerouac—one of the originals of the ‘50s “Beat Generation,” wrote On the Road. Died at age 47; Malcolm Lowry—whose novel, Under the Volcano, is set in Mexico in the 1930s, and was later a John Huston movie; Anais Nin—best known for her lifelong diary. Also wrote the novel The Four-Chambered Heart; Wallace Stegner—historian of the American West, and author of the novel Angle of Repose, which won the Pulitzer Prize in 1972.

Somerset Maugham—wrote part of The Razor’s Edge while living in Ajijic, and previously gained early fame with his second novel, Of Human Bondage; B. Traven—best known for his novel The Treasure of the Sierra Madre, which later became an unforgettable John Huston film; Tennessee Williams—won the Pulitzer Prize for both Cat on a Hot Tin Roof and A Streetcar Named Desire, an early version of which he wrote in Ajijic in the 1940s.

Ms. Nickles’ marvelous introduction concludes with: They all {the characters} escaped to Mexico. What happens to them once they get there is often not what they expect, however, and therein lays the heart of these tales. It is not traveling in general that alters their perceptions and expectations and understandings, but rather the particulars of Mexico: the country is more than the location for each story—it is a character.

Fortunately, neither the insights into the country nor its selections from the great writers in this volume can be reduced to a simple formula. They are gathered here so that we can join them in the varieties of experience, so that we can compare them with our own fantasies of flight, so that we can escape vicariously—or we can carry this book with us when we go.

(Note: The anthology was published by Chronicle Books—San Francisco, and can be purchased on amazon.com)