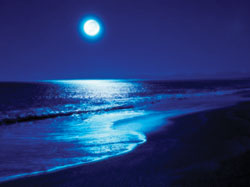 I, along with lots of those I love, seem of late to be lost in difficult and relentlessly demanding days, almost all of which are spent at The Greater Ajijic Anxiety Festival, which has been running now for at least a few years, and whose origins are, along with its original sponsors, lost in time.

Yesterday, before being subjected once again to the hopefully skilled fingers of two retinal surgeons at Hospital Santa Lucia in Guadalajara, I studied some photos of bright orange circles with strange rivers, which were photos of the interior of my own damaged right eye, but which resembled rather closely those brilliant harvest moons, especially the full and lovely ones that we are sometimes blessed to see, that remind us that at the deepest level all is right with the world.

I have written dozens of poems that have had moons rising inside of them, and of course not thousands but tens of thousands of poems and songs have been written about the moon and its subtle and seductive light. Readers perhaps remember Carl Sandburg’s “Under the Harvest Moon,” where “Love, with little hands, comes and touches…and asks you beautiful, unanswered questions,” and of course everyone remembers Henry Mancini’s and Johnny Mercer’s “Moon River,” which I believe was first performed by Audrey Hepburn in Breakfast at Tiffany’s, and most of us can increasingly relate to Cat Steven’s “Moon Shadow.” I could continue this list for at least a hundred pages. But if we are ever really going to see the moon again--and many of us have not actually seen it in decades--we must forget, for the time being, all of those other, more concocted, moons.

The poet Wallace Stevens helped me to rediscover the moon through his poem, “The Man on the Dump,” where we soon realize that we ourselves are the “man on the dump.” There all of our experiences seem to be worthless; all of the “images” of our experiences are on the dump, including the sun, the moon, the cat in the paper-bag, the box from Esthonia, the corset, the tiger chest, for tea.

But, Stevens realizes, “The freshness of night has been fresh a long time. The freshness of morning, the blowing of day….” remain always fresh when we stop pulling the day to pieces, reducing it to mere thoughts and images…when we refuse any longer to sit “among mattresses of the dead.”

When we open ourselves to “the purifying change” we “reject the trash,” we stop living in the past that we have allowed to pile up inside of us. Stevens has offered us a way back into the present:

That’s the moment when the moon creeps up

To the bubbling of bassoons. That’s the time

One looks at the elephant-colorings of tires.

Everything is shed; and the moon comes up as the moon

(All its images are in the dump) and you see

You see the moon rise in the empty sky.

We carry too much of the past with us and so most often we see some image of the world seen through some image of who we conceive ourselves to be. When one moves more deeply into the world before us:

One sits and beats an old tin can, lard pail.

One beats and beats for that which one believes.

That’s what one wants to get near.

To walk out of The Greater Ajiic Anxiety Festival that, like a painted lady, has seduced so many of us so long, we simply need to slough off the images of ourselves and the images we have of others and the images we have layered over the world itself. We must leave these images at the Festival, “on the dump,” and stride forth with new courage into the world of the “here and now,” which indeed has been “fresh a long time.”