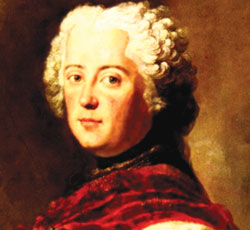 Frederick the Great (1712-1786) is compelling, both as a personality and as a statesman. He was a genius whose principal language was French, even though he was a native German speaker. He admired the French Enlightenment and enjoyed a correspondence with Voltaire that generated over a thousand letters, discussing the arts and philosophy.

Frederick was fluent in several modern languages, as well as being a scholar in ancient Greek and Latin. He loved to write French poetry as a boy and to play the flute. He became one of the top flute virtuosos of all time, as well as an accomplished composer, and wrote countless sonatas for flute and several symphonic pieces. A regular listener to a classical music station will from time to time hear his compositions.

Frederick was homosexual. His father, known as the “Soldier King,” hated him and Frederick hated his father. His father was more the hunter and the military man. Frederick thought hunting was boorish and much preferred to read French literature and compose music, which he had to do in secret. His father complained about his son’s “unmanly, lascivious, female occupations, highly unsuited to a man.” The king called his son an “effeminate fool,” and frequently beat him in public to correct him by pain and humiliation.

When Frederick was 16, it was well known in court circles that he was having a relationship with a 13-year-old boy named Peter, who was the king’s page. Peter, in his role as page, was constantly around the king and kept Frederick informed about what his father was doing.

At the age of 18, Frederick had a foolish idea. He wanted to escape his father and persuaded his friend Hans to flee with him as refugees to England. They were caught and the king had both of them arrested and charged with treason. He wanted to sentence them both to death, but the court persuaded the king to spare Frederick. The king refused to spare Hans, however, and early one morning, under arrest, Frederick was escorted to the execution site to witness the event.

When he grasped what was about to happen, Frederick blew a kiss to Hans and offered a thousand apologies. Hans answered, “My Prince, there is nothing for which to apologize.” Hans declined an execution hood and Frederick fainted when he saw Hans beheaded. He became delusional and had hallucinations for several days afterwards.

Frederick’s father sent him to a military academy after the execution of Hans. It’s uncommon for people to excel with endeavors they hate, but Frederick became a military genius and a statesman. After Frederick became the king of Prussia, Voltaire, a frequent resident, described the court as “Sparta by morning and Athens by evening.” He meant that Frederick devoted the first part of his day to meetings that studied military contingencies and problems of state. He devoted the end of his day to intellectual conversations with friends like Voltaire, poetry readings, and to play music.

The Prussia that Frederick inherited was primitive. The currency was unstable, tax collection was inefficient, and the geography made Prussia vulnerable to attack. Frederick transformed Prussia into a model of efficiency, building schools, stabilizing the currency, creating new industries, and educating judges. He built thousands of miles of roads to facilitate commerce. He removed himself from the legal process and said the kingdom should be ruled by law, not the king’s dictates. Within his lifetime, Prussia was judged to have one of the finest legal systems in the world.

His scientific approach to military contingencies planted the seed for the future German General Staff that would be copied by the United States, where we call it the Joint Chiefs of Staff. When Frederick led in battle, he chose only a simple, unadorned uniform. His soldiers affectionately referred to him as “Old Fritz.”

Hitler tried to cloak himself in Frederick’s mantel as a propaganda gimmick, but the comparison was ludicrous. The Allies were persuaded, however, and to this day there remains a false association of the Nazis with Frederick’s Prussia.

Frederick’s mornings of turning military studies into a science and his evenings of literature and music seem like split personalities, one forged from iron and the other cultivated from sensitivity. Historians regard him as one of history’s most enlightened monarchs.

(Ed. Note: This is the first in a series of articles about intriguing historical personalities and the context in which they lived. Fred Mittag is well-known to our readers for the many probing political articles that he has written for the Ojo.)