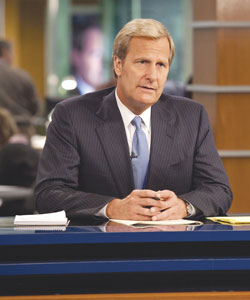 There is a new, but already highly rated show on HBO. The Newsroom stars Hollywood perennial Jeff Daniels, who has been mostly associated with whacky comedies like Dumb and Dumber and on occasion more sophisticated fare like Woody Allen’s quaintly touching Depression-era fantasy, The Purple Rose of Cairo. The show’s creator is Aaron Sorkin, who’s also responsible for The West Wing, The American President and the recent Brad Pitt movie, Moneyball. In short, Sorkin is one of America’s premier screenwriters.

Jeff Daniels plays a cable news anchor and managing editor, and in one of the first moments of the initial episode gives notice that The Newsroom has more on its mind than simply creating mindless entertainment for the masses. Daniels is on-stage with a panel of so-called experts, all of whom are being grilled by a right-wing moderator who is showing off for an enclosed amphitheater filled with college students. The question: Is America the greatest country on the face of the Earth?

The news anchor is slow to respond, but under pressure from the show’s moderator to declare his undying allegiance to the idea that America is indeed the greatest country in the world, Daniels stops the show by finally declaring, “No, it’s not. But it was.”

Having immediately gotten the attention (as well as the animosity) of almost everyone in the packed room, the newsman quietly but forcefully begins to make his case:

—The US today is 7th in Literacy, 22nd in Science, 178th in Infant Mortality, and a distant runner-up in many of the remaining important categories.

— America is, however, at the top of the list in the number of people who believe in angels, and in defense spending, which has a budget larger than the next 27 countries combined, 25 of which are US allies. We also are ahead of the number of people in prison, in ratio to our population.

Does this sound like the “greatest” country in the world? But what about the “home of the brave and land of the free”? The newsman asks: could not England, Canada, France, Australia, Germany, and Mexico, to name only a few, say the same thing? So stop the hype! Stop this “exceptionalism mania,” this persistent thumping of the chest that has drawn the ridicule of so much of the world. Being exceptional is not something you brag about, it’s something you aspire to.

Besides, he says, the first step in fixing a problem is admitting that you have one. Get serious, the news anchor warns the students. The “Greatest Generation” was that one that survived the deepest American depression ever, then played a major role in winning the bloodiest war in all of recorded history. This current generation could well be the “Worst Generation.”

That “Greatest Generation” stood up for what was morally right, sacrificed for the common good, explored the heavens, aimed for the stars, were not afraid of intelligence, had a sense of fair play, and created the strongest economy ever known—and in the process made America the most beloved and admired nation on the face of the Earth. Yet that generation seemed to have far fewer compulsive braggarts than the current one has.

When Daniels finishes telling the students what they did not come to hear, they seem stunned, chastised, though there is a vaguely resolute look on the young faces of many in the crowd. Some seem to get it: being exceptional is not something a country can smugly assume about itself, it’s something it has to earn—and then keep on earning.