By Rob Mohr
This email address is being protected from spambots. You need JavaScript enabled to view it.

The Fine Art of Body Art 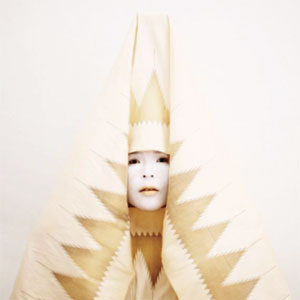 “Art is a personal act of courage, something one human does that creates change in another.” Seth Godin www.sethgodin.com Patriot and creative philosopher Thomas Paine also understood the need for radical change in culture to insure openness.
“That something has existed tells us nothing about its value. The past is dead and the living should use their powers of analysis to sweep away existing arrangements.”
Japanese photographer Kimiko Yoshida (1963-), who rejects current cultural reality in her self-portraits, believes, “(Egocentric) preoccupation with ‘I’ has become a cliché.” She challenges that cliché by creating photos which defy compliance with clothing norms by wearing “art” costumes that reference haute couture in a ceremony of disappearance. In one, she wears a metal and plastic dress that completely reforms her persona. She has taken disappearing to an extreme in a series of works in white where a single part of her face is revealed in vivid color. Her goal is the erasure of her identity.
“I am basically saying that there is no such thing as a self-portrait. Each of these photographs is actually a ceremony of disappearance. It is not an emphasis of identity within culture, but the opposite—an erasure.”
Kimiko’s artworks are refined and remind the viewer of the diversity of ways that culture, ritual and a community’s visual language define what it means to be human. The globalization of cultures in the 20th and 21st centuries has created a homogenous face for humanity (a single ‘I’), and in the process destroyed the rich understandings found in historic human cultures. (Google Kimiko Yoshida) Her “Autoportrait,” The Red Akamba, recently sold at Phillips Gallery for $41,714.
While Kimiko’s portraits represent one extreme of the fine art of body art, tattoos, along with body scarification, piercings, extreme hair, and exotic clothing represent other artistic ways of revolting against the norms of conventional culture. Tattoos on human skin from Pre-dynastic Egyptian burials have been revived, creating a repertory of body art that includes designs influenced by Japan, Africa and Oceania. The key motivation, as with Kimiko’s works, is defining one’s separation from the everyday sameness of homogeneous society.
Serious artists, such as New York-based artist Scott Campbell in his West Coast debut exhibition Noblesse Oblige, transformed tattoo subculture iconography into spiritual works that suggest a merger between the human body and fine art. (Photo) The human body then becomes an expression of individuality linked with ritual, deity, and nature. A recent exhibition in the American Museum of Natural History further demonstrated how the body as an artistic canvas has been treated throughout history to celebrate cultural diversity.
Scarification, the radical scarring of skin tissue, has been adapted today to create a unique persona. Throughout history this practice was used as a rite of passage, to beautify the face and body, and as a mark of status. Those willing to endure the pain believed the raised images conferred physical acuity and spiritual protection. Today, scarification is an aesthetic choice signaling victory in the battle for separation from the crowd. It is clear that art plays a critical identity role in the healthy development of human cultures as it “sweeps away existing arrangements.”
Click to see all Body Art:
https://plus.google.com/photos/111258927866130698336/
albums/5765461975011893713 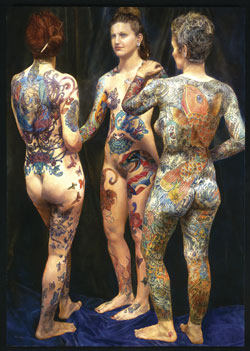