The Unsung Mexican Heroes Of WWII 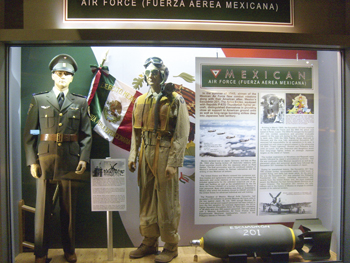 Until yesterday, I had never heard of Charlie Foster. Today, I’m writing about him. One of the benefits of being a writer is the fact-checking, because you can end up with provocative information. That’s how I found out about Charlie Foster.

An ace flier is defined in the dictionary as a fighter pilot who has destroyed five or more enemy aircraft. Charlie Foster was a World War II ace with the 201st Fighter Squadron. What’s more, Charlie’s heroism beyond the call of duty netted him a Congressional Medal of Honor.

Yet no one made a movie about Charlie Foster, the way they did about Audie Murphy, a famed Medal of Honor-winning World War II hero, in To Hell and Back. No HBO miniseries about Charlie was made by Tom Hanks and Steven Spielberg the way they made Band of Brothers, the one about WWII’s 101st Airborne Division’s Easy Company. No Hollywood studio made an Oscar winning film about the 201st, as they did about the Civil War’s first all-black volunteer company in 1989’s Glory. But in its way, Charlie’s tale is as special as those famous stories of heroic actions.

What makes Charlie’s story unique is that his real name isn’t Charlie Foster, it’s Carlos Faustinos, a Mexican citizen. Carlos fought beside American airmen in the Pacific Theater and was a member of the elite “Esquadron Aereo de Caza 201,” also known as the Fighting 201st.

Not only did this information surprise me, but so did the fact that Mexico declared war on the Axis powers on June 11, 1942. Imagine that. Can’t you just see kind, agricultural Mexico declaring war on the Big Bad Wolves Hirohito, Mussolini and Hitler? But Mexico did indeed declare war, and they put their men where their collective mouth was.

It was at that time Mexico organized the 201st Fighter Squadron, a select group of Mexican pilots, including Carlos Faustinos. Thirty-five officers and 300 enlisted men were trained in Mexico, then given additional flight training as P-47 fighter squadron at Pocatello Army Air Base in Idaho, and were then attached to the 58th Fighter Group in the Philippines where they began combat operations. They wiped out machine gun nests, dropped 181 tons of bombs and fired 153,000 rounds of ammunition, acquitting themselves well and bravely. Seven of their pilots were killed in action.

The Fighting 201st wasn’t the only heroic group of Mexicans. In a town called Silvis, just west of Chicago, runs a street once named Second Street. It’s not much of a street, not even two blocks long, muddy in spring, icy in winter, dusty in summer. On this single street, 105 men participated in World War II, Korea and Vietnam. It’s the street where Joe Gomez, Peter Macias, Johnny Muños, Tony Pompa, Claro Soliz, and Frank, Joseph, and William Sandoval grew up together. They worked for the railroad, like their fathers who had emigrated from Mexico. These young men, raised to revere freedom, went to war without hesitation

The two Sandoval families alone sent thirteen; six from one family; seven from the other. According to the U.S. Defense Department, this little street contributed more men to military service than any other place of comparable size in the United States, standing alone in American military history.

In a letter to Frank Sandoval, Claro Soliz described Second Street as: “... Really not much, just mud and ruts, but right now to me it is the greatest street in the world.” He never saw it again. Not one of these boys came home alive.

In honor of their supreme sacrifice, a monument listing the name of each man now stands in Silvis, Illinois. Second Street has been officially renamed Hero Street USA. Next time you’re in the mid-West, you might want to visit this street of heroes just to say thank you.

Maybe these stories weren’t sensational enough to be covered by CNN, but they happened just the same.

(Ed. Note: Bravo, Marge, for a fine article, and yet another salute to the heroic actions of both Mexicans and Mexican-Americans during WWII. In researching my first historical novel, I too made surprising discoveries—such as that the latter group became, in ratio to their numbers, the second most highly-decorated ethnic group in the entire history of the United States. They also won—again in ratio to their numbers, the most Congressional Medals of Honor. Mexico has much of which to be proud—and we are proud to bring some of that history to our readers.)