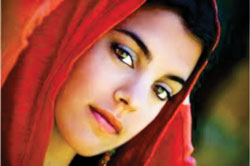 I recently reread Nathaniel Hawthorne’s remarkable novel, The Marble Faun, so filled with insights about artists and art. Describing Miriam, a central character in that novel, Hawthorne tells us that she had “dark eyes, into which you might look as deeply as your glance would go, and still be conscious of a depth that you had not sounded, though it lay open to the day.”

Only yesterday, after ordering English style fish and chips in a Riberas eatery, I discovered among the hundreds of available books that line the walls around the dining area, a John D. MacDonald novel, Nightmare in Pink. MacDonald, also capable of profound insights, created more than fifty years ago the popular Travis McGee character, hero of twenty-one well written novels. While munching away, I came across a passage where McGee notices there is a sudden shift inside of him regarding the young woman whom he has been trying to help:

“There is a time in all such things when eyes look into eyes, with vision narrowing and intensifying until there is nothing left but the eyes, searched and searching. This is a strange and tingling thing that narrows the breath—but it is a communication, and once it has happened there is an awareness beyond words.”

That “strange and tingling thing” has something to do with waking up to the present, the now. Being immersed in the eyes of the other, immerses us into present, indeed into a different consciousness, one without words, where we become deeply alive, no longer dragging the insistent past behind us, no longer living in some imagined and even feared future.

Anthropologist Helen Fisher suggests that “Perhaps it is the eye—not the heart, the genitals, or the brain—that is the initial organ of romance.” In a study called “The Effects of Mutual Gaze on Feelings of Romantic Love,” published in the Journal of Research in Personality, forty-eight men and women, total strangers, were placed together for several hours, each being instructed to have various levels of eye contact with the others: “Subjects who were gazing at their partner’s eyes and whose partner was gazing back reported significantly higher feelings of affection than subjects in any other condition.”

In Walden, which I have also been rereading, Henry David Thoreau writes: “Could a greater miracle take place than to look through each other’s eyes for an instant?”

Remember that Frankie Valli hit in the late 60s, “I Can’t Take My Eyes Off of You”?

In How to Make Almost Anyone Fall in Love with You, Leil Lowndes tells us that “People who love each other not only indulge in much more eye contact while talking, but they are more hesitant to take their eyes off each other, even after they finish speaking.”

Curiously, we also tend to respond to large pupils…so much so that for centuries drops of the hallucinogenic and even toxic plant belladonna (Italian for “beautiful lady”) were used by women to dilate their pupils. Dr. Eckhard Hess, who fathered a science he called pupillo-metrics, discovered that the male response to a woman with large pupils was twice as strong as to the same woman with small pupils. The same was true for the female response to a man’s pupils.

Regardless of whether your intention is romantic, looking deeply into the eyes of another, looking into that dark mystery that poets have made so much of, does draw us into the present. When we develop relationships with certain people through that presence which comes through looking into each other’s eyes, words then (and all of their limitations as well) become a minor thing and our future relationships with those persons changes.

Later in that John D. MacDonald novel our friend Travis McGee, again in the presence of that attractive young woman, finds himself looking “into blue, down into blue, teetering on the edge of blue depths.” He reflects that people genuinely getting to know each other are “using and knowing, learning and giving, new signs and signals in a private and special language, freshened heats and scents and tastes, sweetened gasps of fitting thus, knowing this, learning of that, rediscovering the inexhaustible here, the remorseless now.”