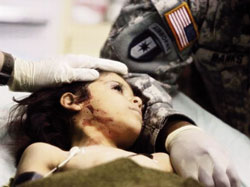 (A few months ago, the ten-year war in Iraq finally came to an end. Total cost: More than 4,500 U.S. dead, tens of thousands of wounded (including PTSD), many thousands permanently maimed, 250,000 Iraqi dead, millions homeless and an 800 Billion Dollar cost to the American taxpayer. No weapons of mass destruction were ever found. Given that, we thought our readers might be interested in an Ojo editorial that we first published in November of 2002.)

During the last presidential campaign, this column opined that George W. Bush was the least qualified Republican candidate in fifty years. The point was easily made when one compared him with far more seasoned leaders such as Eisenhower, Nixon and even Bush’s own father. Since then, nothing Bush the Younger has done has caused us to alter that evaluation.

Yet even given his lackluster credentials, we cannot believe that he is sincere in his desire to launch a preemptive attack on another nation, and then commit the US to a long and potentially hideously expensive effort to recreate Iraq in our own image. Has Bush not heard the howls of protest from the great majority of the countries of the world, the wise words of caution from prominent members of his own party, as well as from many military men who distinguished themselves in the Gulf War?

Yet he has been deaf to all reasonable objections, whose specifics include:

Surely this is a smokescreen to obscure a faltering economy, a nose-diving stock market, a squandered surplus, all the corporate scandals (including those tainting even the president and his VP), and that Bush has made good on almost none of his campaign promises?

But if he is indeed serious, the following is instructive: during the Mexican Revolution, President Woodrow Wilson was visited by a group of U.S. senators, as well as several titans of business. They wanted him to send an army to Mexico to “straighten out those revolutionary bastards” who were threatening U.S. business interests.

Wilson offered them a deal. If each man would allow a son or grandson to be in the first brigade sent to Mexico, he would reluctantly accede to their demands. Wilson never heard from anyone in the group again.

Bush has two daughters of military age. If he will “volunteer” them for action in Iraq, tens of millions of skeptics like me might finally take him seriously. Hell, I’ll sign up myself, even if I have to roll into the recruitment office in a wheelchair. But don’t stay underwater waiting for anything like all this to happen.

(Postscript: Many of the same bellicose voices that bullied the American people into the catastrophic ten-year war in Iraq are now clamoring for another war against Iran, which is also “suspected of having weapons of mass destruction.” To indulge in a redundancy, it is déjà vu all over again.)