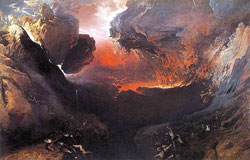 At Lakeside, the earth’s diversity, vivid colors and organic textures enrich our lives. They are our markers, the frame in which our living takes place. My hope is that this brief look at the history of landscapes will encourage readers to reconnect their spiritual and emotional ties with the mysterious and sometimes savage world that nurtures us.

Humanity’s cave paintings were fluid and natural in form. But as settled communities developed, artists used simplified and abstracted human and animal forms in bands, or multiple ground lines read from bottom up to tell their story. The lowest band was the underworld, and the top band the heavens. Classical Roman frescoes returned to observations of nature with mythological overtones but maintained multiple ground lines to position humans and animals within the painting. During the Middle Ages, landscapes became mere stage sets for biblical stories. And even as the Renaissance flourished, powerful art academies in Italy and France discouraged landscapes that lacked biblical or mythological themes.

Artists in the Netherlands ignored the dictates of academies and focused instead on the natural world and its occupants. Pieter Brueghel the Elder’s (1525-1569) landscapes, depicting the life of common people, revolutionized western painting. Through the power of his vision, Brueghel magically transports the observer back in time into a world that remains eternally alive (photo).

Many of the standards for landscape paintings that endure today are the result of Brueghel’s understandings. Landscapes are entered from the lower quadrant. Perspective creates the illusion of three dimensions as planes and lines converge in the distance. Closer objects overlap distant objects. Distant objects diminish in scale and are lighter and less defined. Warmer colors move forward, cooler colors away from the viewer.

In 1800, artist Pierre-Henri de Valenciennes wrote in his Elements de Perspective Pratique, “landscapes should be based on studies of the natural world.” Following Valenciennes, Nicolas Poussin’s studies of nature coupled with the expressive works of Gustave Courbet (1819-1877) opened the way to even more radical, tactile works by Charles Daubigny. By the late 19th century, Impressionists Monet and Renoir and post-impressionists Cezanne and Van Gogh, following the lead of Courbet and Daubigny, used visible brush strokes, vivid hues, simplified forms and keen observation to create landscapes that exploded with light, permanently changing human perception of nature.

Cezanne (1839-1906) disassembled the natural landscape and reassembled it using geometric planes and prisms along with sensitive, exploratory brush strokes that impart a solid feel to the land. The result was the depiction of a natural world unique in human history.

By the end of the 19th century, Matisse dominated the poetic landscape using juxtaposed planes of color and pattern, while Wassily Kandinsky (1866-1944) continued the revolution begun by the Impressionists by reordering color, space and form to evoke the land rather than render it. His use of multiple perspectives, anticipating Picasso, enabled the artist to observe the land from simultaneous vantage points. Kandinsky wrote, ”music is the only pure art form,” divining the move toward abstract expressionism that swept through the 20th century. Following Kandinsky, Graham Sutherland ’s Black Landscapes, reminiscent of the Apocalyptic works of John Martin (1789-1854), helped set a darker tone for the last half of the 20th century. (photo at top).

Good landscapes continue to reflect humanity’s spiritual and emotional connection with the land while confirming that the fine arts uniquely lead humanity towards a richer perception of the earth we occupy.

Link to Paintings mentioned in this article - 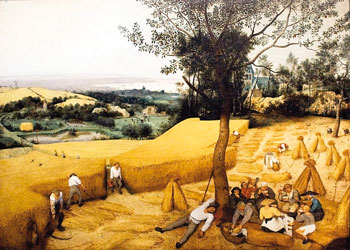