"Making Love with Form or Spirit" 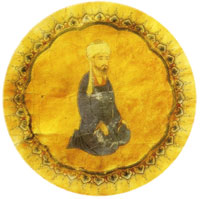 At the beginning of January, I published a new collection of poems—To Love for a Thousand Years—that was at least in part inspired by the poems of the Sufi master, Hafiz (c.1320-1389), Persia’s most beloved poet.

In recent decades, Daniel Ladinsky has published popular versions of some of the poems of Hafiz (based upon the translations of H. Wilberforce Clark). Ladinsky writes that “With a wonderful—at times outrageous—genius Hafiz brings us nearer to God.” Ralph Waldo Emerson in the 19th century discovered Goethe’s translations of Hafiz into German and then translated those into English. In his journal Emerson wrote of Hafiz: “He fears nothing. He sees too far; he sees throughout; such is the only man I wish to see and be.”

Ladinsky, in the Preface to The Gift, a wonderful collection of his own versions of poems by Hafiz, assures us that “Hafiz is one of the greatest spiritual friends, lovers, and guides that humankind has ever known. For centuries he has been called The Tongue of the Invisible, for he continues to sing beautiful and wild love songs from God. He invites us to join him in his fantastic applause of life.”

Henry S. Mindlin, in his introduction to that same book, concludes that “Hafiz shares his intoxification with the magic and beauty of divine life that pulsates everywhere around us and within us. He urges us to rise on the wings of love. He challenges us to confront and master the strongest forces of our own nature. He encourages us to celebrate even the most ordinary experiences of life as precious divine gifts. He invites us to ‘awake awhile’ and listen to the delightful music of God’s laughter.”

What is this precious love and laughter

Budding in our hearts?

It is the glorious sound

Of a soul waking up!

Here are a couple of my favorites from The Gift. Read them slowly, two or three times, preferably out loud. Here is “If God”:

Invited you to a party

In the ballroom tonight

Will be my special

How would you then treat them

There is no one in this world

Hafiz begins “Where Does

Real Poetry” with these lines:

Where does real poetry

From the amorous sighs

In this moist dark when making love

In still another poem Hafiz announces that he has learned so much from God that he can no longer call himself a Christian, a Hindu, a Muslim, a Buddhist, or a Jew. In a poem titled “The Great Religions,” he tells us: