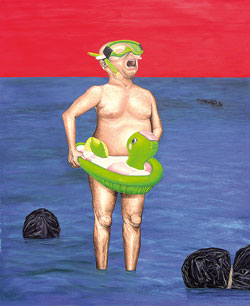 David Mendoza, one of the most creative, provocative painters I have interviewed for Focus on Art, has forced me to look hard at the cost of being a discerning artist.

“I am searching for a rationale for my art. Because my work is a protest against violence, individuals seldom buy, and the institutional response to social comment is icy. To use one’s gift to create art, means ignore the consequences and do all you can to make the world a better place to live.”

David strives to awaken the viewer, but realizes that the beauty of art is not to reveal exactly what the artist is saying but to entice the viewer to use their imagination to unravel the images. In his painting of a man swimming surrounded by floating bodies while wearing a child’s lifesaver and snorkel, David coaxes the viewer to consider the man’s reaction to violence. “Everyman” cries like a child instead of being an adult who acts to stop human violence. “Like sheep we only react when hit.”

Most of David’s paintings include intimate concerns for his family’s well being. He moves from the personal to the societal. Recent works reveal his alienation, outrage, and protest against a society that treats humans as objects for profit or elimination. His emotional reaction to the violence done to a woman’s body as she carries and delivers a child has engendered some of his best paintings. Men forcing their wives to bear child after child led him to create art focused on ways to prevent pregnancy, or that reveals the physical cost of childbearing for a woman. Paintings of women who have had multiple cesarean births leave haunting images in the viewer’s mind.

David’s sense of alienation is shared by three other young Mexican Artists. Juan Carlos Castillo evokes the Mexican reality in a sculptural installation which depicts a group of men tortured and burned whose heads have been torn off leaving jagged lines of separation. “Lo Que Oculta Tu Nombre” painted by Raul Oscar Martinez, depicts a person’s memory floating through space isolated from its source. And in Ruben Maya’s installation, Sueño y Trinidad, several naked men hang by their lower legs, and in another a group of men and women stand gaunt and mindless like sheep. His works make clear human captivity within the Mexican reality. The emotion - the outcry - the protest made in each of these works are examples of the same alienation which drives David Mendoza. www.arteven.com

David’s paintings follow in a long history of social protest art in Mexico. Prior to the 1910 Mexican revolution, painter, Jose Guadalupe Posada (1852-1913) illustrated a series of scathing broadsides using skull and skeletal figures to represent the callous and greedy actions of those in power. His work has become the source for contemporary Day of the Dead skeletal art.

In the post-revolutionary period beginning in 1920, Diego Rivera was appointed by Jose Vasconcelos, Education Minister, to develop a national program of art to awaken the masses to injustice in Mexico. Jose Clemente Orozco, David Siqueiros, and Rufino Tamayo all began careers as mural painters as a result of the government’s pro-art stance. Capturing the suffering of the Mexican people, each of these artists counts among the great painters of the 20th Century. www.all-art.org/art_20th_century/rivera3-2.html www.kolahstudio.com/underground/?p=62

David Mendoza is courageously taking his place as one of the great socially aware artists of his time. In January his paintings will be exhibited in the Galeria “Art Studio Arte Contemporaneo”- Ocampo #61, Ajijic – Opening reception (Cocktail) 5 PM January 13, 2012.