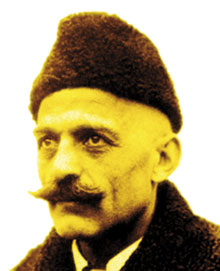 George Gurdjieff, the “Rascal Sage,” was born in 1870 of a Greek father and Armenian mother in the Caucasus region of Russia. According to Kathleen Riordan Speeth in The Gurdjieff Work, he wandered the world “to find the remnants, the descendants, or the living presence of human beings who were in contact with an eternal and unchanging core of true wisdom.”

Riordan writes, “We are like householders who own a beautiful mansion of four levels, but we live in privation and darkness in the kitchen and the basement, disputing whether ‘living rooms exist.’”

In Gurdjieff’s seven Levels of Human Development, after resolving the seductive qualities of the three centers—the intellectual, the emotional, and the moving-instinctive—and unifying the energies of those centers, a few men and women reach level 5, where they are “crystallized.”  At the highest level, Number Seven, the very rare man or woman who reaches it “possesses all the qualities a human being can have: will, full consciousness, a permanent and unchanging “I,” individuality and immortality.”

And so part of the work is recognizing our own fragmentation, moving closer and closer to “essence,” to a master personality. P.D. Ouspensky, who for years worked closely with Gurdjieff, says this: “The illusion of unity or oneness is created in man first, by the sensation of one physical body, [second] by his name, which in normal cases always remains the same, and third, by a number of mechanical habits which are implanted in him by education or acquired by imitation. Having always the same physical sensations, hearing always the same name and noticing in himself the same habits and inclinations he had before, he believes himself to be always the same.”

Riordan writes that “According to Gurdjieff each adult has many selves, each of which uses the word ‘I’ to describe itself. At one moment one ‘I’ is present and at another there is a different ‘I’ who may or may not even know the other ‘I’ exists for between ‘I’s’ there are often relatively impenetrable defenses called buffers. Clusters of ‘I’s” make up sub-personalities that are related by association…. These clusters may not know of other clusters of ‘I’s’ with which they are not related by association. One ‘I’ may promise and another may have no knowledge of the promise, owing to buffers, and therefore no intention of honoring it.  One group of ‘I’s’ may rush enthusiastically into a marriage that makes other ‘I’s’ resentful and withdrawn. Certain ‘I’s’ may value and work toward an aim that other ‘I’s’ subvert. But unlike other machines, the human psychological machine has the potential to study itself. Through this study a higher level of being is possible. Perhaps we should try to greet each other not with “How are you” but rather—after looking into their eyes as deeply as we can—we should greet each other with “Who are you?”