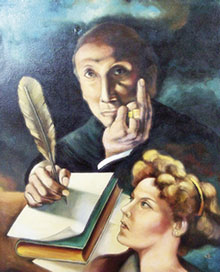 In a Mexican pleiad somewhere between the North Star of Octavio Paz (1914-1998) and the Southern Cross of Sor Juana Ines de la Cruz (1648-1695), there shines a star poet. Amado Nervo is one of Mexico’s most distinguished poets of the late 19th and early 20thcentury. Newspaperman, scholar, diplomat, Nervo had just taken up the responsibilities of Mexico’s ambassador to Argentina and Uruguay when he died from a heart attack, age 46. Toward the end of his life, he enjoyed the honor of being called Prince of the Continental Poets.  His works—poetry, short stories, science fiction, essays, magazine articles—fill over 30 volumes.

He was a co-founder of an important literary journal, La Revista Moderna--important because it became the vehicle for the modernismo movement in Mexico. Patterned much after the Paris Parnassian movement (Art for Art’s Sake), it emphasized introspection in one’s writings—a self-awareness, an openness to the unconscious `a  la Sigmund Freud, mysticism, and humanity’s darker side. Deeply religious yet conflicted because he also believed in scientific evidence, Nervo sought new ideas to help reconcile his religious beliefs with the conclusions of modern science. He studied the concepts of Buddhism, Taoist contemplation, Zen, and, especially, Hinduism—such as Brahma, the Creator:

Brahma isn’t good or bad, since His limitless qualities

Brahma is what he is.

Brahma , in an everlasting rapture, cold,

Is looking at His own essence…

If He sleeps, the Cosmos turns to emptiness:

Though if awake, it re-emerges.

The ravages of WW I, the long Mexican Revolution, and the dreadful difficulties of life for most Mexicans under the Porfirio Díaz regime turned the poet’s thoughts inward toward the mysterious questions and limitations of life and death, religion and spirituality.

I am not too wise to deny you, Lord;/ I find logical your divine existence;

I have enough by opening my eyes to find you;/ The entire creation invites me to adore you,

Nervo’s beloved, Ana Cecilia, died after only 11 years of happy marriage. Nervo was so enveloped by grief and despair that he wrote a series of poems under the title “La Amada Inmóvil,” the Motionless Lover.”

To live without your loving look, candid and transparent, is too much darkness.  Tr. by Herlinda Diez de Díaz,  Ajijic.

Nervo felt that the world had lost its way and that only the poet and his poems remained to contend for peace.

Very near my setting sun, I bless you, Life, because you never gave me unrealistic hope

Or unfair work, or underserved sorrow/pain, because I see at the end of my rough way

that I was the architect of my own destiny, and if I extracted the sweetness or the bitterness of things

it was because I put the sweetness or the bitterness in them. When I planted rose bushes, I always harvested roses.

Certainly, winter is going to follow my youth, and you didn’t tell me that May was eternal.

I found, without a doubt, long my nights of pain, but you didn’t promise me only good nights,

And, in exchange, I had some peaceful ones.

I loved, I was loved, the sun caressed my face. Life, you owe me nothing; Life, we are at peace!