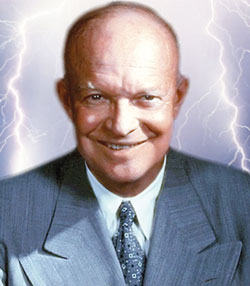 Classify me as a military hawk that belongs to four pro-military organizations, and has three awards of honor I can pin on my chest.

Plus, I believe in the adage every nation has an army on its land - either its own or its enemy’s occupying army. And, if a nation doesn’t defend its sovereignty, it will lose it.

Yet, I also stand by President Dwight Eisenhower’s warning about the threat posed by the “military-industrial” complex. Eisenhower, brilliant military leader, whom, after the Korean War, cut the USA’s military budget by 27%.

After getting the USA out of the Vietnam War, President Richard Nixon cut the USA’s military budget by 29%. Then this unfairly maligned man ended the military draft.

On winning the Cold War and toppling the evil Soviet Union’s slave empire - without firing a shot, or losing one American life - President Ronald Reagan also started to chop away at the USA defense budget. So did President George H. W. Bush.

That brings us to the point: Why, with no major power threatening the USA, does it have a defense budget of some $700 billion annually - and with add-ons perhaps nearing $1 trillion?

OK, Ok - Communist China has a staggering 1.1 million men and women in uniform, but it is hardly likely to attack its biggest trading partner. Beijing’s leaders may be cunning, but they aren’t suicidal.

Other questions: Why does the USA need to have tens of thousands of troops in Britain, Japan and South Korea? Elsewhere, too.

True, South Korea needs to be protected from the madmen in North Korea, and Britain is a geographical forward launch pad, but how many American troops should be stationed in these nations?

As for Japan, and its traditional enemy, China, why can’t it protect itself?

Recently, Canadian Conservative Prime Minister Stephen Harper declared he was pulling his nation’s troops out of Afghanistan this year because one can’t fight a “never-ending” war.

British Conservative Prime Minister David Cameron - whose nation has a neat squadron of nuclear attack fighter bombers and a fleet of nuclear attack submarines - announced he was cutting his country’s defense budget by 20%.

Since the end of the Cold War, America’s European NATO allies have seen their GDP increase by 50%, but on average they have cut their NATO contributions again by an average of 20%. In real terms, that’s a cutback of 70%.

America’s enemies, and those of other Western industrial nations, are basically a rag-tag bunch of  Islam fanatics.

What can the USA’s massive fleets of aircraft carriers and battleships, and huge squadrons of aircraft do against small hit-and-run Islamic forces?

Surely, well-trained, top-notch commando forces, like the Navy Seals or Britain’s Special Air Services, which routinely quietly assassinate the United Kingdom’s enemies are the answer—and at a fraction of the cost.

So why has the USA still got a staggering military budget? Could it be too many retired generals and admirals slip into post-retirement jobs as lobbyists for defense manufacturers and contractors?

Again, I’m a military hawk, but believe Eisenhower, Nixon, Reagan, Bush Sr., Harper and Cameron got it right. And they were, or are, all Conservatives.

Bottom line: Why hasn’t President Barack Obama studied what these individuals did, and followed in their paths? After all, what the heck did he get the Nobel Peace Prize for!?