Magic Realism: A Visual Poetry of Fantasy and Dreams 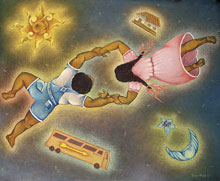 Salvador Dalí wrote, “There is only one difference between a madman and me. I am not mad.”

My recent interview with Jesus Lopez Vega brought into focus the evocative, revolutionary power of Magic Realism (MR) to impart a fresh perception of the world. Reviewing the development of MR reminded me that for the artist, their unique perception is everything. Their personality, perspective, subconscious, dreams, history, and culture - magically combine and flourish in their art. Henri Rousseau (1844-1910) awoke from a vivid dream in which a forest of overgrown tropical house plants was inhabited by a nude woman and a black snake charmer who stood hidden in the moon light, surrounded by animals of the forest, as his music calmed them.  Rousseau that morning sat down at his kitchen table and painted his dream to perfection. In that moment MR was born. www.henrirousseau.org/

Rousseau’s vision was fulfilled when in 1924, Andre Breton, who had worked with Freud and Jung doing experiments with “automatic writing”, wrote the Surrealist Manifesto, which confirmed that unfiltered thought and vision could create societal and artistic change. The next year, Franz Roh’s essay “Magic Realism” in the “Revista de Occidente”  formalized the movement.  Both documents attracted a growing number of artists to mine the subconscious through dreams to create art. 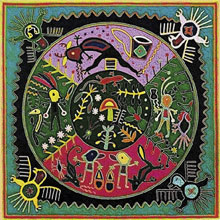 Oaxacan Rufino Tamayo (1899-1991), who painted in New York City from 1937 to 1949, added indigenous symbols to his narrative MR where men and women became spiritual objects rooted in the texture, earth and people of Mexico. www.rufinotamayo.org Tamayo’s success led Oaxacans Francisco Toledo (1940 - ) to use pre-Columbian understandings to depict magical narratives about rural life, and Rodolfo Morales (1925 - 2001), to write, “My paintings are unmistakably marvelous because of their altered reality (as miracle), revelation, and unexpected and juxtaposed scale, all imparting an extreme state of being.”  www.indigoarts.com/gallery_oaxaca_main.html

Jesus Lopez Vega and his brother Antonio, both students of the Neil James art school, have made significant contributions to this unique approach to MR.  Jesus, a prolific Magic Realist and a serious student of the indigenous culture of Jalisco and Lake Chapala, is currently working on a book to chronicle the history, art, and life of the people. Jesus wrote in “Meretrices”, May, 2005:

“In stories filled with details of rural life like Los de Debajo by Mariano Axuela, the vast, fertile world of Magic Realism comes into being.”

In his superb painting “Infancia” (enclosed), Jesus Lopez Vega blends a narrative component with symbolic elements, as an indigenous couple surveys the home, community and universe they inhabit. This powerful image is the result of Jesus’ sensitive, psychological understating of his community and world.

Jesus shared this story about Lake Chapala: “One May, when I was eight, a big cloud formed over the lake, and the elders saw that it was a snake when a water spout came down and moved across the lake to dump the pollution on Mezcala. The elders believed the gods were acting through the snake to clean the lake.”

Stories like these, when translated into paint, become both acts of revolution and magic as artists such as Jesus reveal a world not seen with everyday eyes, The greatest magic of all would be the realization of their dream for a healthy environment for all who share life around this ancient lake that has given life to animals for millions of years and to humans for thousands of years. 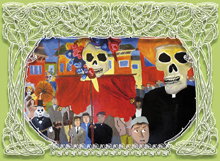