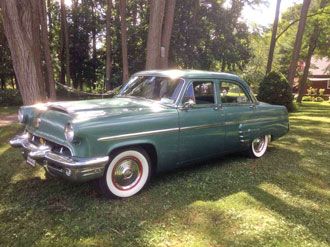 When you are a young boy, approaching 16 years of age, there are only two main concerns in life. One is related to hormones and the other is as strong and could be considered a lust…having a car of your own. As I approached that magic age, after hounding my father relentlessly, he would take me out on country roads and let me practice my driving skills. I do not recall any cars with automatic transmissions, so the bulk of my learning skills revolved around understanding how the clutch worked. Often I would rev the engine to the max, let out the clutch and we would rocket down the road spewing rocks and gravel, or I would slightly rev the engine and kill the motor when releasing the clutch. Once I was in first gear, I often forgot to engage the clutch, grinding the gears unmercifically.

I still remember the grimace on my dad’s face, but the frown was quickly replaced with a patient smile and a gentle reminder. We practiced frequently and when I was seventeen, my grandfather decided I needed a car of my own. I was so excited when the day came, and the car arrived at my house. The car was a green 1953 Mercury that was purchased for the incredible sum of $50. It had been wrecked three times and the finish was rippled since no one had taken the time to repair the outside, but it had a great motor and as I looked at it for the first time, a Rolls Royce could not have looked better.

I remember the pride in the eyes of my father and grandfather. I was so excited...A CAR! MY CAR! I washed it, polished it, dusted the interior which did little good to remove the permanent old car smell, but to me it was like heaven.

The ownership of a car helped with the other main concern in my young life...girls. There seems to be a sudden growth in stature in a man when a car is involved. Driving around one handed, with the window down, your elbow out the window, the wind blowing your ducktail gelled hair, your white t-shirt with the sleeves rolled up, jeans worn low on the hips and boots completing the picture...My Friends, James Dean had nothing on me. This addition put me on the level of my friend Monty Allgood who had a 1950 Ford...we had something to brag about speaking in car lingo about horsepower, loud pipes, squealing tires, and of course…..the girls who wore our class rings proudly around their neck. Ah, life was good.

I drove my Merc for three years and she behaved well. Not being the least bit mechanically minded, I knew only to change the oil when the color was so dark you could not see the markings on the dip stick, put water in the front thing when steam came whistling out of the grill. These minor annoyances began to occur with more frequency until one day I was out of our little town on the highway and ran into a Highway Patrol Safety check.

The officer, his shiny badge, dark glasses, Smokey the Bear hat and shiny black boots parked behind me and I began to sweat as I observed his ominous presence in my cracked rear-view side mirror. I noticed a small smirk on his face as he sauntered up, observing the rippled siding on my prize mode of transportation.

“Morning, son!”...Oh God! I was beginning to sweat. “Noticed you have a tail light out...did you know that?” I did, but decided to play innocent and just said, “No Sir! I will get that fixed today.” He smiled, knowing I was a liar and continued...this is a safety inspection. Could you turn on your windshield wipers please. I wanted to say, “I don’t drive this in the rain”...the wipers didn’t work...

“How about the turn signals...I could say, “I only drive on straight roads”...but in truth, they hadn’t functioned since I had owned the car. The officer, by this time was having a difficult time keeping a straight face, walked around the front and said, “Put on your high beams”...you guessed it...they didn’t work either. Mercifully he did not write me a ticket, but listed the things needed before the end of the month and I drove away leaving a blue cloud of smoke and a laughing patrol officer. When I totaled up the charges to get my dream car fixed, I was astonished to find it was more than the car was worth.

My Merc sat alone in the driveway for nearly a month until I had it hauled off. That day was almost like attending a funeral as I had to trade my chariot in for another car...I can’t even remember the make or model but it was nothing like my dream, my chariot, my chick magnet, 1953 Mercury.

Editor’s Page - July 2010
Editor’s Page By Alejandro Grattan Did I Remember to Tell You That I Forgot?   A few weeks ago, over coffee at the LCS, I told a pal that I