Why Do They Come to America? 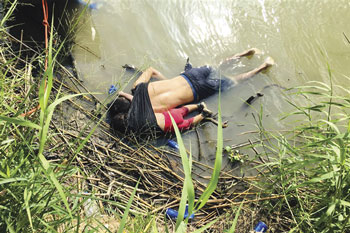 The heartbreaking photo pictured to the right, which has now gone viral all over the world, speaks volumes about what the United States of America has meant to oppressed or disadvantaged people almost from its inception as a Republic. My own family’s history is part of that story: my father’s ancestors first came because of the potato famine in Ireland, which left millions in a state of slow starvation; my mother’s family initially came from Mexico after its Revolution in 1917 had made life hazardous for many middle-class families, especially those that owned property or businesses, no matter how small or humble.

America’s promise to the world was literally burnt into steel on the Statue of Liberty, and the immigrants that came before and since have repaid their debt millions of times over. Every one of those who have come to North America were immigrants because the Indians were there before anybody, probably standing on the shore as the Mayflower first came into view.

What follows is one of the news stories that accompanied the publication of the photograph: According to Le Duc’s reporting for La Jornada, Óscar Alberto Martínez Ramírez, frustrated because the family from El Salvador was unable to present themselves to U.S. authorities and request asylum, swam across the river on Sunday with his daughter, Valeria.

He set her on the U.S. bank of the river and started back for his wife, Tania Vanessa Ávalos, but seeing him move away the girl threw herself into the waters. Martínez returned and was able to grab Valeria, but the current swept them both away. The account was based on remarks by Ávalos to police at the scene — “amid tears” and “screams” — Le Duc told The Associated Press.

Details of the incident were confirmed Tuesday by a Tamaulipas government official who was not authorized to discuss the matter publicly and spoke on condition of anonymity, and by Martínez’s mother back in El Salvador, Rosa Ramírez, who spoke with her daughter-in-law by phone afterward. “When the girl jumped in is when he tried to reach her, but when he tried to grab the girl, he went in further ... and he couldn’t get out,” Ramírez told AP. “He put her in his shirt, and I imagine he told himself, ‘I’ve come this far’ and decided to go with her.”

From the scorching Sonoran Desert to the fast-moving Rio Grande, the 2,000-mile U.S.-Mexico border has long been an at times deadly crossing between ports of entry. A total of 283 migrant deaths were recorded last year; the toll so far this year has not been released.

In recent weeks alone, two babies, a toddler and a woman were found dead on Sunday, overcome by the sweltering heat; elsewhere three children and an adult from Honduras died in April after their raft capsized on the Rio Grande; and a six-year-old from India was found dead earlier this month in Arizona, where temperatures routinely soar well above 100 degrees Fahrenheit.

The search for Martínez and his daughter was suspended Sunday due to darkness, and their bodies were discovered the next morning near Matamoros, Mexico, across from Brownsville, Texas, several hundred yards (meters) from where they had tried to cross and just a half-mile (1 kilometer) from an international bridge.

Tamaulipas immigration and civil defense officials have toured shelters beginning weeks ago to warn against attempting to cross the river, said to be swollen with water released from dams for irrigation. On the surface, the Rio Grande appears placid, but strong currents run beneath.

Ramírez said her son and his family left El Salvador on April 3 and spent about two months at a shelter in Tapachula, near Mexico’s border with Guatemala. “I begged them not to go, but he wanted to scrape together money to build a home,” Ramírez said. “They hoped to be there a few years and save up for the house.”

El Salvador’s foreign ministry said it was working to assist the family including Ávalos, who was at a border migrant shelter following the drownings. The bodies were expected to be flown to El Salvador on Thursday.

* What Ramirez wanted was a second-chance at Life—and who amongst all of us fortunate people here at Lakeside has not once wished for that same opportunity?