A Novel by James Michener
Commentary by Alan Robertson 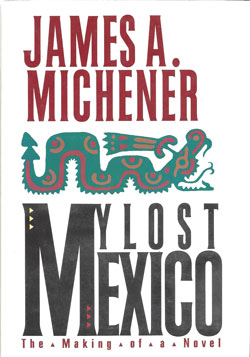 Suppose you have worked for three years on a novel and have finished two-thirds of it. Suppose you have a six- minute talk with your publisher whose judgment you respect. Then suppose this short conversation makes you feel that you have lost control of your narrative and causes you to abandon the project.

That’s the story of Michener’s My Lost Mexico. He put the novel’s manuscript aside in 1961. It was accidentally shelved in a store room and lost for thirty years. In 1991 it was found. Michener was satisfied that the work he had started all those years ago was still vital, and he rekindled the imagination and desire to finish the book.

The author tells us how Mexico came to be constructed: the ending, set in a bullring in Guanajuato, developed first; the middle portion, the operation of a 19th century silver mine, came next; and, finally, a glimpse of pre-Columbian Indian life formed the introduction to the novel.

But this is far more than a respected author’s notes on the making of a novel, as useful as that is to anyone who aspires to be a professional novelist. It also tells how it is possible for an author to emerge from such a disastrous experience with a new philosophy that affirms his own personal values, his own perception of his craft, and of his ability to write. As an additional bonus, My Lost Mexico contains a hitherto unpublished novella, The Texas Girls, which alone is worth the price of the book.