By Shep Lenchek
From the Ojo Archives 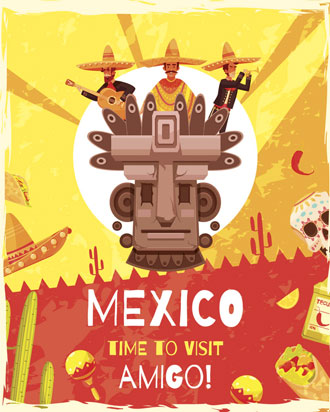 “Hurry up, you´ll be late for school.” “Can´t you ever be on time.” “Get-dressed, the party starts at eight.” Those of us from northern climes know too well the tyranny of time.

It has been drilled into us from early childhood and has governed both our business and social lives. Bound by inflexible links to hours, minutes and seconds, we have made punctuality into a demigod, even in sports. In football, the quarterback struggles against the play clock. The tempo of basketball is set by the shot clock. Neither were part of the original game.

Baseball, the only major sport with no time restrictions, seeks to speed up the game by timing intervals between pitches and conferences at the mound.

Now, we are in a country where the chains to time are replaced by more elastic restraints. In this land of mañana, the social code ignores lateness. A relaxed, slower paced, less competitive society should bring less stress. An ideal retirement area.

Yet for some, the adjustment to a more flexible concept of time is difficult. They still impose upon themselves standards of promptness that lead to anger, frustration and stress. Driving down a village street, they find themselves behind a truck stopped for a delivery. All hell breaks loose. Expletives race through their minds and sometimes spew from their mouths.

Then there´s the guy standing in line at the bank watching the teller have a long conversation with the customer. The smiling and laughing can´t have anything to do with business, and the gringo starts to grumble to his fellow standees. Maybe he´s afraid he´ll be late for his appointment with his psychiatrist. Better to admire the senoras and senoritas standing in line with you, or try to say a few words to the one or two kids who are dodging about. Single women might cast an eye on the men in their vicinity; maybe even smile at the one who looks like he has the largest amount of cash to deposit. You never know.

We live amongst one of the most polite, sociable and helpful people in the world. Here the extended family still survives. A run-down of how relatives are doing can take fifteen minutes. And that only covers close kinfolk. Also, if I tell you about my family, it is only courteous to inquire after yours. Perhaps another fifteen minutes goes by.

Yet it is only time and this exchange of information or gossip is the cement that holds Mexican society together. Talking with one another is a pleasure that costs nothing. There is always time to listen to problems and offer advice. Most conversations end up with laughter and smiles. With only 142 people for every 1000 subscribing to newspapers, oral rather than written communication is the rule of the day.

There is another plus to this flexible approach to time. People are never too busy to help someone in trouble. A broken-down car attracts a swarm of amateur mechanics. Often they solve the problem. If they can´t, someone will go out of their way to find a professional who can fix things. The same thing is true of a flat tire. Promptness surrenders to helpfulness and sociability.

A word of warning, however. When asking directions, beware. The same desire to be helpful can lead to disaster. Once, heading for Puebla, I asked someone if there was a short-cut around Mexico City.

“Si, Senor.” I gave him a piece of paper and he drew a map. It looked as good as anything I could have gotten from the Auto Club in the States. Forty minutes later, I was in Cuernavaca. I had wondered about the directions when I saw myself going west rather than east but figured the road would start to curve. Anyhow, Cuernavaca is a beautiful city that I always wanted to see. Besides, perhaps I had pronounced Puebla wrong.

I once wrote a poem entitled “Rules for Living in Mexico.” The first verse went like this:

Never put off ´till tomorrow what you can put off ´till next week. Just learn to tell them “Manana” No matter with whom you may speak.

A little poetic license, but also good advice for those trying to cope with the Mexican time system. Remember “manana” doesn´t really mean tomorrow, just “not now” and “momentito” can stretch into an hour. Carry a book with you at all times. I read War and Peace while waiting for my doctor. But that was in Michigan. Here I´m working on The Rise and Fall of the Roman Empire.

How did the Mexican attitude toward time first develop?

It probably has two roots. One is the extended family that will always forgive lateness on the part of one of its members. Since promptness does not matter within the most important unit of Mexican society, why expect it in dealings with strangers?

The second root is perhaps because the Industrial Revolution came to Mexico only recently. Even in Europe, it was not until after 1760 when manufacturing moved from cottage industries to factories that a fixed hour workday was born. Enslavement to the clock had begun.

In Mexico, a largely agricultural economy was controlled by the sun, as well as the rainy and dry seasons. Mining, the only other significant enterprise in those days, used Indian workers whose work hours were enforced by overseers, not a clock. Artisans and artists worked at their crafts without fixed hourly limits.

With increased industrialization, Mexicans may yet fall victim to the clock. Hopefully, it will not be a complete capitulation that destroys their ability to take time to enjoy life.

But for those of us who have retired here, we can break those chains to time that have controlled us most of our lives. The freedom is ours for the taking. Unless we do, our patience will be tried and the real charm of Mexico will escape us. An old Mexican toast says it all. “Health, Love, Money and the Time to enjoy them.”