THE 2012 PRESIDENTIAL ELECTION—Possibly the most important ever in the history of the USA! 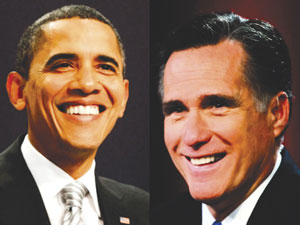 Compromise is dead in Washington! The Republicans have produced a divided government, complete gridlock and widen ideological gaps on financial stabilization and economic recovery, on deficits and debt, on climate change and on health-care reform.

“The Republicans are the Problem,” says Norman J. Ornstein, the renowned conservative spokesperson of the American Enterprise Institute.  In an article in the Washington Post a few days ago, he and Thomas E. Mann state: “The GOP has become an insurgent outlier in American politics. It is ideologically extreme, scornful of compromise; unmoved by conventional understanding of facts, evidence and science. It is dismissive of the legitimacy of its political opposition.”

The Democratic Party has retained its diverse base. They have hewed to the center-left on welfare reform, fiscal policy and such, but they are not nearly as far out to the left as the Republicans are to the right. The reasons, Mann and Ornstein point out, are Newt Gingrich’ strategy to create a Republican majority in the House. The forces he unleashed destroyed whatever comity existed across party lines, activated an extreme and virulently anti-Washington base, and helped drive moderate Republicans out of Congress. Republicans dismiss any nonpartisan analyses of their behavior that doesn’t fit their ideology.

Former Republican Senator Chuck Hagel calls his party “irresponsible” and “captive to a political movement that is very ideological and intolerant.” Mike Lofgren, a 30-year veteran Republican and staffer ended his career on the Hill and wrote “The Republican Party is becoming less and less like a traditional political party in a representative democracy and becoming more and more like an apocalyptic cult, or one of the intensely ideological authoritarian (Nazi) parties of 20th century Europe.” Political scientists Poole and Rosenthal found that Republicans are “now more conservative than they have been in more than a century.”

If the media would address the problems squarely and analyze the consequences of the coming elections, perhaps Republicans would come to their senses. As voters we have little responsibility left in our democracy, but we can punish ideological extremism at the polls and force the Party back to the center.

(Ed. Note: As we draw closer to the presidential election in the US, the Ojo welcomes articles and letters espousing the positions of the Republican Party.)