The Daily Life Of Jesus Of Nazareth 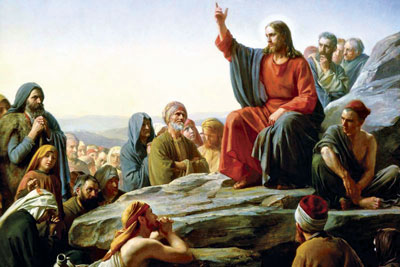 So often, he is portrayed as a white man, with blue eyes and shoulder length hair. Contrary to such images, he would have had olive colored skin, rendered even darker by long days in the harsh Levantine sunlight. His eyes would have been dark, his hair of medium length and dark. He was probably of average height. He would have had the hard callused hands of a working man because he labored in his earthly father’s woodworking shop during his younger days. He would not have exhibited the almost unisex appearance that centuries of artists have imagined. Rather, his appearance would have been that of a rugged individual who spent long periods alone in the Judaean Desert and aboard fishing boats bouncing about in the stormy Sea of Galilee.

Jesus is often depicted wearing an ankle length white robe. He would not have been so attired. Rather, his one piece tunic would have been perhaps knee length. His feet would have walked in sandals, and he would have worn a woolen mantel called a tallit with tassels called tzitzit at each corner.

The scriptures say that his first cousin John the Baptist, something of a wild man who risked death to warn members of the power structure and the heedless masses of the consequences of their cruel and greedy ways, fed upon locusts and wild honey. Jesus would have followed the typical diet of a Mediterranean peasant. He may not have eaten grasshoppers like John, but his would have been mostly simple fare.

Jesus was raised by his mother Mary in the ways of Jewish orthodoxy, including dietary recommendations and restrictions. Bread baked from either wheat or barley would have formed the basis of most meals. While wheat was considered the staff of life and the king of grains, barley, regarded as poor people’s food, is far more nutritious, so much so that Roman gladiators were fed it in order to foster greater strength. Jesus used barley bread when he fed his hungry audience of 5000 members on that knoll overlooking the Sea of Galilee.

Anywhere from one to three loaves of bread would have typically been consumed by each person at mealtime in ancient Israel. The bread was usually darker and heavier than modern bread, consisting entirely of whole grains. Bread was generally baked on a flat rock, and it was rolled out and formed into a circle so that it would be larger than a pancake and thin like a tortilla or peta bread.

Fish was the most common source of protein in Jesus’s world. The Mediterranean Sea, Sea of Galilee, and the Jordan River were readily available sources of fish. Fishing was a major commercial enterprise. On any given day, there could have been as many as 500 small boats out fishing on the Sea of Galilee. Mosaic Law dictated that only fish with fins and scales could be consumed. Crustaceans or mollusks were forbidden, as would have been catfish.

Pork remains forbidden to both Muslims and Jews. The taboo has more than one origin. Pigs lack sweat glands and so must cool themselves by wallowing in mud or water. In a part of the world where water is a scarce commodity, contamination of springs, creeks and waterholes by pigs would prove catastrophic. Then, too, pigs are notorious for eating anything, including feces and garbage. Such habits offended those peoples who sought purity in all things. Pigs, too, carry such menacing parasites as trichinella.

The issue of animal sacrifice in the ancient world raises its ugly head in any discussion of livestock during the time of Jesus. The practice largely ended among Jews when the Jerusalem Temple was demolished by the Romans in 70 AD. Some modern Jews believe that  sacrifice will not be resumed until the Temple is restored.

There is a theory among some Biblical scholars that when Jesus drove the money changers out of the Temple, he was more offended by their turning that sacred space Into a slaughter house than a commercialized pandemonium. Many of the offenders were in the business of selling sacrificial birds and other animals.

Whenever Jesus was invited for a meal at the home of a person of limited means, who had no sheep or goat or fatted calf to share, he may have been treated to red stew, consisting of beans and lentils boiled in garlic. Other vegetables such as leeks, onions, cucumbers, melons, beans and peas would have formed part of the diet of the average person in Jesus’s day.

There were fewer restrictions regarding the consumption of fowl than there were for hoofed animals. Chickens, ducks and geese provided some of the menu of first century Jews, as did doves, quail, partridges, and pigeons. Eggs were an approved food source.

More than likely, dessert in Jesus’s time would have consisted of grapes, nuts, figs, apples, pomegranates, apricots and honey.

Would Jesus have drunk wine? Probably. There are sincere Christian denominations that encourage total abstinence. Others are less strict. Some argue that the wine consumed at, for instance, the Last Supper was in actuality grape juice. In the days of Jesus, wine was a regular and important part of the average diet. Mosaic Law condemned drunkenness and over consumption of wine. While wine is an important part of a meal in such countries as France and Italy, some cultures, Americans, for instance, find it difficult to do much of anything with moderation. Jesus would not approve of either gluttony or intoxication. Because wine consumption is strictly regulated, alcoholism is very rare among Jewish people.

The most important liquid Jesus would have consumed is water. It is the most important nutrient for the human body, which consists of 2/3 water.  Coffee came along later, a gift of the Arabs, and the Aztecs can be thanked for chocolate. In Jesus’s time, tea was brewed from plants like mint.

As for exercise, Jesus walked nearly everywhere. On some occasions, he sailed upon the Sea of Galilee in fishing boats. In one or two instances, he rode a donkey. He led a simple, basic life, much as St. Francis and Henry David Thoreau advocated.

The diet of first century Palestine was a healthy one, approximate to such contemporarily  promoted nutritional programs as the Japanese diet and the Mediterranean diet. A diet of whole grains, fish, nuts, vegetables and fruits is most likely to foster good health and a long life.

The accoutrements and dietary preferences of Jesus in first century Palestine may spark interest but in actuality tell us little of what the man was really like when he walked the earth among us. For a much deeper understanding, we need to consider his ministry of healing of mind, body and spirit, his condemnation of hard heartedness and hypocrisy, and his great wisdom that has been handed down to us in such beautiful parables as “The Prodigal Son” and “The Good Samaritan”.