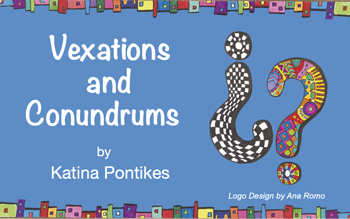 I’ve noticed that as we age my friends are all being struck by more health ailments. Our prescription numbers increase with our years on the planet. Most of our issues are shared and common: high blood pressure, high cholesterol, high weight numbers. This was not the “high” we envisioned to grace our senior years. There isn’t anything fun about adding these concerns to our already challenging lives.

Every now and then someone calls with an odd diagnosis. One friend had “Dura Leakage.” Her spine was leaking fluid. This sounded scary and was accompanied by migraines. Her specialist had to give her painful shots in her spine, and the treatments were numerous. Traditional medication failed to ease her pain. I cross fingers with each shot, hoping this might be the one that works.

Another friend called with the droll pronouncement that she had “Tree and Bud, whatever the hell that is!” I researched and the photos of the blooming tree in the lungs were sobering. That tree shouldn’t be there. Of course, this could advance to something life-threatening. We don’t discuss it.

This week I was taking a bath, when I went to rinse soap off my hands. Wait! What was this bump in my palm?! I soaped and rinsed four or five times, thinking this would disappear. No such luck.

I dried off and took a long look at my hand. There were two of these weird knots which had appeared seemingly overnight. I Googled “knots in palms.” Google can really help the amateur diagnostician. Three possible causes came right up on my screen. One had vivid photos that looked exactly like my palm. Diagnosis: Dupuytren’s. Basically, nodules form and can cause your fingers to become stuck or curl inward. Frightening. Of course, this was on my right hand, and I’m right-handed. What if my middle finger stuck, and I walked around shooting the finger at everyone? My popularity would plummet, and my lifespan would shorten. Shooting the bird gets you shot in Texas. I was in deep trouble.

I sent a photo to one friend. She said she too had it. She said not to worry about surgery, as they might just amputate the offending finger. She chose to live with it, bumpiness and all. She wondered if we might become a traveling act, like twin freaks. Her humor didn’t cheer me as much as she intended.

I had to accompany my husband to a plastic surgeon for a biopsy on his face. I’d sneak a chance to show this to the surgeon, under the guise of requesting he remove the offending bumps. He took one look at the nodules, now increased to four. As they had seemingly multiplied in forty-eight hours, I had visions of me in a horror movie, the character Swampwoman. Scary, gnarly, scaled over. I’d frighten small children, repulse adults. My latest grandchild would nickname me Bumpy and wouldn’t want her head touched with my reptilian hand.

The doctor said what I had usually occurred in older Scandinavian men. He had a perplexed expression. How comforting. He referred me to a hand surgeon. His nurse offered comfort, “Maybe the hand specialist can give you some steroid shots as a first option.” Imagine that numerous long needles penetrating my sensitive palm was a wonderful first option.

I’ll call to make the appointment today. I hope I can get in soon. The way these bumps are proliferating, I don’t have time to waste. I’m too old for the rigorous schedules required to produce horror movies.