The Small Town That Produced A President 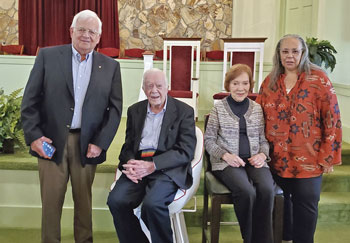 “Come back again when you can,” invited the kindly elderly man.

I had to remind myself that this soft-spoken man inviting my wife and me to his church was one of my most admired historical figures, Jimmy Carter, the 39th President of the United States and a Nobel Peace Prize Laureate. Meeting the former president and First Lady has been the high point of our winter season with the National Park Service in the tiny town of Plains, Georgia.

The Maranatha Baptist Church held perhaps 35 members and an equal number of visitors on that rainy morning. The Sunday school lesson was taught by President Carter’s niece Kim Miller, his brother Billy Carter’s daughter. It was superlative, as was the sermon delivered by  Rev. Tony Lowden, the pastor.

In Plains, Georgia, it seems that everyone knows everyone. The town reminds me of many back in my home state of Ohio.  Plains is a crossroads community bisected by two lightly traveled highways and a railroad track. There are three churches, a small business district and a single restaurant.

The restaurant, the Buffalo Cafe, is reminiscent of many small town restaurants, the service friendly, the food delicious and delivered in such bountiful amounts that no one could conceivably leave hungry. Citizens are warm, courteous and welcoming. There is a sense of timelessness in this quiet town with not a single stoplight, a sort of Norman Rockwell quality.

A 14-foot peanut wearing a giant Jimmy Carter grin guards the entrance to the single RV park. The National Park visitor center is located in the old Plains High School building where President Carter graduated in 1941, his wife Rosalynn  three years later. The center has recently undergone extensive renovations and innovations. The six rooms are filled with new exhibits and memorabilia are unique and impressive.

One day each week, I am assigned to Jimmy Carter’s boyhood home, a 17-acre working farm two and a half mile outside of Plains in the black agricultural community of Archery.  I spend the hours conversing with four goats, two mules and a pair of barn cats named Scaredy-Cat and Fraidy-Cat. When Earl Carter, Jimmy’s father, purchased the farm in 1927, it consisted of 360 acres. He cultivated an additional 2000 acres of leased land. Given the soil quality, it took many acres of corn, cotton and peanuts in order to earn a good living. I imagine that I can hear my Grandpa Swinehart, who farmed 72 acres in rural Ohio all of his working life, saying, “This ground is so poor that you couldn’t raise a fuss on it.”

The house was constructed from free plans found in a Sears and Roebuck catalog.  Until 1938, there was no electricity. Electricity would come to rural areas only after the New Deal created the Rural Electrification Commission in 1934.

There was no running water. The makeshift shower in the bathroom consisted of a bucket with holes drilled in the bottom. Ground water was pushed through a pipe to the shower by the windmill outside.

The only source of entertainment was the battery powered radio in the parlor. By pressing a button, one can listen to President Carter share the experience of the night Joe Louis defeated the German boxer Max Schmeling. Jimmy’s father sat the radio in the window so that their black neighbors and farm hands, a crowd of about forty people, could listen to the fight. Despite Adolf Hitler’s crowing that Germans were the Master Race, Louis cleaned Schmeling’s clock in the first round.

The crowd of black people remained silent. After quietly thanking Earl Carter, they walked out of the yard and across the acreage to one of their homes, where they celebrated all night. Joe Louis, a black man, was the “strongest man in the world.” It would not be wise for black people to celebrate too openly in the often violently racist South of those days.

In his memoir An Hour Before Daylight, President Carter speaks of the hardships of farm life in the 1930’s. Days were long, the work rigorous and the rewards few. Most small farmers worked forty to sixty acres. It took three acres to produce a bale of cotton or a ton of peanuts. Generally, a farmer could expect to earn fifty dollars for a bale of cotton or sixty dollars for a ton of peanuts. If one was a sharecropper, he would only be able to keep half or less of the crop and that after paying rent for use of the land.

The lines “I owe my soul to the company store,” in Tennessee Ernie Ford’s song “Sixteen Tons,” lamenting the hard lives of coal miners, accurately describe the dilemma of southern sharecroppers and farm workers as well. Many landlords, unlike Jimmy’s father Earl, who only charged a dime on the dollar, levied high rates of interest for items purchased on credit in their commissaries. A poor family could never work their way out of the cycle of poverty.

Jimmy’s mother Lillian, a registered nurse, recognized the relationship between malnutrition and illnesses like pellagra and the pervasive lassitude that sapped the energies of poor farmers and sharecroppers. Items purchased in the commissaries consisted of lard, fatback, cornmeal, molasses and coffee. Many suffered illnesses associated with protein and vitamin deficiency.

The Carter farm produced cash crops such as peanuts and cotton, as well as garden crops for the family. Like many farmers, nearly everything they consumed around the dinner table came from their own soil; potatoes, corn, sweet potatoes, tomatoes, beans and peas. They milked eight cows twice a day and slaughtered up to forty pigs in the winter.

President Carter’s life gives proof to the old adage in my part of the country that hard work never killed anyone. He went to work on the farm at an early age. One can find no complaints in his writings other than his dislike of the miserable process of “mopping cotton.” To prevent destruction of the cotton crop by the ever present plague of insatiable  boll weevils, each plant had to be “mopped” during the fiery hot days of summer. The process consisted of bathing each plant with a mixture of water, molasses and arsenic. At the end of the day, Carter writes that his pants were so encrusted with sugar that they could stand up alone.

One cannot rightly consider life in the rural South in President Carter’s youth without including the harsh realities of racism and segregation. After returning to Plains from his years of service in the US Navy, Jimmy Carter experienced the boycott of his business on two occasions. Early on, he refused  to join the White Citizens Council, even after his fellow townsmen, recognizing that he was short of money, offered to pay his twenty dollar membership fee. Carter simply replied that he could not contribute to an organization in which he did not believe. When they insisted, the future president quietly took a twenty dollar bill from his pocket and flushed it down the toilet.

On one occasion, Carter’s peanut processing and warehouse business was boycotted because he dared to do business with the local Koinonia Farm, an integrated Christian business and farming community. He continued to supply the people there with seed peanuts and to market their products despite local opposition which was sometimes violent.

Some years later, while he was serving in the Georgia State Senate, after the White Citizens Council had mostly withered away, his business was boycotted when the John Birch Society circulated the rumor that he and his family had been attending a Communist training camp in Alabama while they were away for three weeks on vacation in Mexico. As  Fred Mittag, my fellow contributor to El Ojo, has often reflected, people will believe anything. Carter had to provide the hotel and meal cash register receipts from his Mexican vacation before the boycott ended.

As a boy, Jimmy Carter hunted, fished, played with and worked alongside his black friends. At the age of 14, he became sadly and starkly aware of the invisible racial divisions, an incident vividly described in his poem “The Pasture Gate,” included in his collection Always a Reckoning. On that day, his friends pushed open the pasture gate and stood back to allow him to pass through first. Initially, he assumed it was a joke that his boyhood friends had put a trip-wire in his path or that he was about to step in something. But then, the painful reality struck him:

We only saw it vaguely then,

but were transformed at that place.

A silent line was drawn between

friend and friend, race and race.

His friends’ parents had explained to them that they were no longer children, that they now had to defer to the white boy. I think of that incident each time I stand at that gate by the mule pasture. Such scars endure forever.  In Jimmy Carter’s case, the incident fostered a lifelong quest to combat poverty, racism, cruelty and injustice wherever they are to be found.

Old patterns of established injustices and even cruelties do not die easy deaths. The principal of Plains High School insisted that the building would be integrated only over his dead body. When in 1966, integration became mandatory and came to Plains, the principal went home and shot himself.  Those first black students who came to Plains High School suffered taunts, name calling and spitballs from some others.

As I look at the 1966 yearbook pages, I wonder how many bullies may lurk behind the saccharine smiles. It took great personal courage, true grit, to be Jimmy Carter in southern Georgia during the 1950’s and 60’s, long before he ever entered politics or public life, long before anyone even asked, “Jimmy Who?”

A cousin describes Jimmy Carter as a good Christian man, not a religious person but a man who simply lives what he believes. The guiding light of his faith led Jimmy Carter to the presidency and to a decades long career as a humanitarian, working through the Carter Center to eradicate such horrendous ailments as Guinea worm and river blindness, to mediate between enemy nations, to encourage the democratic process globally and enforce recognition of the rights of women and religious and ethnic minorities. All that by a soft spoken, honest, kindhearted man who invited my wife and me to come back to his church.