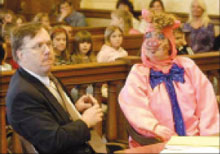 When I wasn’t in the courtroom with judges and juries, I would sometimes act as an arbitrator of civil cases. Generally the cases took about an hour or two and the pay was $300.00. I was on the state payroll and so the extra money came in handy. I heard about one such case every month and enjoyed playing judge for a change.

I scheduled one memorable arbitration during a lunch hour in plaintiff’s counsel’s office. It involved a rear-end collision. The plaintiff, who appeared to be about 85 years old, was a soft-spoken, tall gentleman, represented by counsel. His wife, also an octogenarian, sat next to him during the hearing. The defendant, who had hit the elderly couple from behind, sat across the office with counsel for his insurer. As the arbitrator, I sat behind an oak desk in a leather swivel chair.

As expected, the plaintiff was led by counsel through the facts of the collision. The defendant had been charged by police with inattentive driving and had already pled guilty to the charge in a magistrate’s court. For purposes of the arbitration only, defense counsel stipulated to his client’s liability. That left the matter before me as a decision on damages only.

It was a typical whiplash case, with the plaintiff suffering from shoulder and neck pain. He had been treated for nine months by a local chiropractor. After all the evidence was submitted, I gathered the exhibits and announced that I would reserve my decision.

At that point, the plaintiff’s frail-looking wife stood up, clearly agitated, and announced, “Wait a minute. I have a complaint too!” Plaintiff’s counsel, who had been staring at the ceiling, shyly added, “Yes, Mrs. Andrews would like to state her loss of consortium claim briefly, if you will allow it.” I quickly agreed.

“Mrs. Andrews,” I smiled. “Just tell us the exact nature of your claim. How has this accident affected you, as Mr. Andrews’ wife?”

She shook her head, bit her tongue, and in a thin voice, began. “Well, sir. Before the accident, Mr. Andrews just fine as a man. But now, and I know he’ll forgive me for saying, he can’t do it in positions no more. You know, the sex things, sir.” With that, she quickly sat back down.

Her lawyer, a jokester of sorts, was again staring at the ceiling. Having been caught by surprise and wondering if this was a Candid Camera stunt, I thumbed through the exhibits, trying not to laugh or smile. When I had composed myself, I looked at the tiny lady staring directly at me.

“Well, thank you very much, Mrs. Andrews. If there is no cross examination, I will factor your claim into my decision.”

I adjourned the hearing. Defense counsel and his client hurried away, followed by the Andrews, shuffling out quietly. None of the attorneys was able to look at me.

I made a decision on Mr. Andrews’ claim within minutes. However, I pondered his wife’s claim for several days. How could I put a dollar figure on the sweet little old lady’s claim that she couldn’t have her husband “in positions no more.” Finally, I awarded her $7,500, hoping all the while that I might one day, years hence, understand the exact value of her complaint.