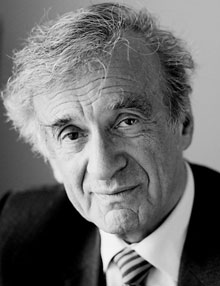 If any individual could symbolize the psychic and moral disconnection that is reflected by the words and actions of the Zionists who comprise the vast majority of the Jewish Israeli population today, it would have to be Elie Wiesel.

Born in 1928 in Romania, Elie and his family were shipped off to German concentration camps in 1944. Only Elie survived, and in 1945 he was liberated. His first book, “Night,” contained possibly the most emotive and chilling descriptions ever written of the effect of the camps on the human soul and psyche. He thereafter dedicated his life to combating the recurrence of such horrors. The consistent theme underlying his many writings is the moral responsibility of all people to fight hatred, racism and genocide.

As a result of his energetic pursuit of this objective, he was awarded the Nobel Peace Prize in 1986 and was appointed Chairman of the President’s Commission on the Holocaust, an activity that led to the creation of the museum in Washington D.C. His stated attitude towards the Holocaust is best reflected by his comment that “… to remain silent and indifferent is the greatest sin of all …”

Yet, when it comes to the sixty year history of ethnic cleansing; dispossession; torture; incarceration without trial; destruction of homes, orchards and vineyards; assassinations and pervasive economic deprivation and humiliation of the Palestinian people by Israel, Wiesel has been described by one observer as “the noted apostle of the obligation of silence in the face of atrocities by the state he loves.” In short, the moral responsibility to fight hatred, racism and genocide stops at the border of Israel/Palestine. The “greatest sin” of remaining silent is there’s not a sin.

How can someone so seemingly imbued with moral outrage at hatred, racism and genocide remain silent while a state whose interests he tirelessly promotes pursues such brutal policies – all grounded in hatred, racism and the desire to achieve removal of all members of the targeted ethnic group from the state of Israel?

Wiesel’s silence is perhaps reflective of his own inner sense of self-betrayal, betrayal of his oft- repeated moral code. He and his brethren in Israel have decided that their own security, given the long history of the treatment of Jews, lies solely in the creation of an ethnocratic state stripped of foreign elements and encompassing as large a land mass as possible. The fact that such a decision requires the abandonment of self-proclaimed moral values vis a vis non-Jews is an acceptable compromise. But admitting this truth about themselves would deprive them of the moral high ground to which they assiduously make claim through the creation of Holocaust museums and a plethora of writings on the subject of the Shoah.

Have Israelis now become their pre-1945 enemy? Is there a distinction between Hitler’s treatment of the Jews and Israelis’ treatment of Palestinians? Perhaps only in one respect: Israelis do not presently contemplate killing all Palestinians. They simply provoke situations that allow them to “justify” killing as many as necessary to achieve the desired objective of having the survivors either expelled from the land or imprisoned within walled, economically nonviable enclaves. But is it really less heinous to be subjected to a slow death of deprivation and despair than to die at once?

(Ed. Note: We welcome opposing views to this article. It has always been our policy to elicit strong and honest debate.)