SUNLIGHT IN A DEMOCRACY 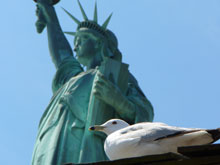 Oh, the inconvenience of sunlight in a democracy that boasts First Amendment freedoms of speech and press. The Freedom of Information Act would seem almost superfluous, but sadly, it’s still not enough.

Even now, I hear people in the news trying to justify our policy of torture by falsely claiming it yielded terrific results—now a thoroughly proven mendacity from which even the inveterate liar Dick Cheney is retreating. But we are still trying to sanitize this evil by calling it “enhanced interrogation.” I think of enhancing the flavor of a dish with seasonings, or enhancing a portfolio with a good investment.

But to “enhance” questioning with pain and panic strikes me as bizarre usage. It’s like saying James Byrd’s 1998 dragging death in Jasper, Texas was enhanced by his killers being white supremacists. Now I’m afraid to enhance the flavor of my soup with salt and pepper, for fear the soup will begin to talk.

Related to this was G.W. Bush’s policy of hiding flag-draped coffins from the press, a policy thankfully revoked by Obama (unless the family objects, and I don’t think many have). But Obama is still a Cheney retrograde in his cover-up of prison abuses by protecting photos held by the Pentagon.

Senator Lindsey Graham said, “Every photo is a bullet for our enemy.” I disagree, and think focusing on the photos is an effort to set up a straw man. It was every abuse that was a bullet for our enemy. We now know, even without seeing the photos, that detainee abuse wasn’t an aberration of a “few bad apples,” as we were told, but that it was a systemic result of policy.

Hiding the photos doesn’t undo the abuse. And our enemies know about the abuse with or without photos, and they use it in their recruiting. In the meantime, there is a steady chipping at the First Amendment and the Freedom of Information Act, not to mention a failure of justice with regard to the detainees.

Information available to the public has the potential to shape policy, as happened to our government from the growing antiwar protests during the Vietnam era. That’s why Bush didn’t want us to see the caskets coming home from Iraq. It’s why Obama doesn’t want us to see the photos of detainee abuse. And it’s why the Chinese Communists use filters to protect their people from information available on the Internet.