Ken Masson has been playing, teaching and writing about bridge for 35 years. Originally from Dublin, Ireland, Ken has been living in Toronto since 1967. He and his wife and bridge partner, Rosemarie, are now in their third year wintering in Lakeside.

The bidding on this hand was fairly standard in the modern game and was probably repeated at many tables in a matchpoint duplicate game played at the Lake Chapala Duplicate Bridge Club.

With East and West passing throughout, North opened 1 diamond and South responded 1 spade. North rebid 2 clubs and South made a conventional call known as “fourth suit forcing”, in this case 2 hearts. This alertable bid announced the values to force to game and asked partner for a further description of his hand.

The fourth suit call does not promise any particular holding in the suit bid. In this deal, North rebid his clubs to show 5-5 in the minors (and also denied holding as many as 3 spades, since he had already denied 4 by not supporting partner at the first opportunity). South now finished the bidding with a call of 3 No Trump.

West led her fourth best heart, the 8, and declarer played low from dummy. East played the 10 (third hand high) and declarer followed with the four. East continued with the heart 3, covered by South’s 7 and now the defenders had to be careful. Since West had no entry to her long hearts, she had to duck this trick and hope her partner had a quick entry plus one more heart to get back to the winners in her hand.

And so it materialized. Declarer won the heart Queen in dummy and immediately took a successful spade finesse, winning the Queen. He continued with the diamond 10 and, with the King conveniently located in the West hand he was able to run 5 diamond tricks. Alas, he then ran out of steam and when he had to switch to clubs, East won the first trick with the Ace and promptly returned his last heart to defeat the contract

Technically, declarer erred when he failed to play the heart Queen from the dummy at trick one. His best chance on this deal was that West held all the outstanding high cards (the Aces of hearts and clubs and the King of diamonds) or that West held the diamond King and the hearts were 4-4. These chances would not have prevailed in this case and the contract was doomed so long as the defenders kept their communications open. 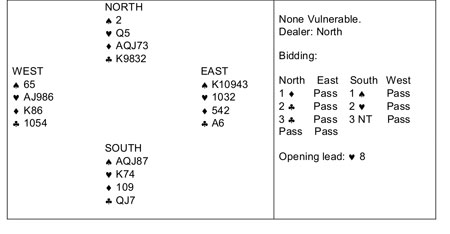