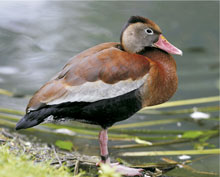 Early this year we spent time with birding friends exploring the east end of Lake Chapala for the first time. We followed the Lerma river, driving slowly and stopping every few hundred yards to look for birds. We discovered a pond, with reeds, the only pond we have found in the large, drained farming area that used to be a vast marsh. Passing the pond, suddenly I observed a bird with a long, pale-brown neck which made me think “that’s an unusual looking heron.” I quickly stopped the car and we got out to look. A key feature was the bright pink beak. It didn’t take long to identify it as a Black-bellied Whistling Duck.

Back at home I discovered it was not on the list of birds sighted around Lake Chapala. It was a first! Since then we have observed them on the coast around San Blas, where they are common. This summer we discovered a family of these ducks much closer to home. We saw a pair of adults with half a dozen ducklings swimming at a dam not far from “Los Burritos” restaurant on the way to the airport.

These birds are found from Texas to Argentina and do not migrate, though they will wander in large flocks in the winter. In the summer they nest in tree cavities, or on the ground if they have to. They have a “strong monogamous pairing bond” meaning they stay with the same partner for many years. Both parents share incubation and care of the young. The ducklings are able to feed themselves almost immediately after hatching. Adults feed on aquatic plants, worms, insects and grain.

In the past, over-hunting was a concern. Now, with nesting box programs and less hunting, the population in North America is increasing, and it is expanding its range.

When this species was added to the Lake Chapala List, the Black-bellied Whistling Duck appeared at the top of the list. I asked myself “what does this mean?”

It turns out that professional ornithologists have followed the lead of the botanists who first got into the listing game. The listers have always shown the most primitive species first, followed by those that have evolved progressively from the older species. So it is that when you buy a bird book you will find the birds arranged in peculiar sequence. They are arranged from the oldest species, to the most genetically evolved species. At the beginning of the book you find loons, ducks and gulls; at the end you find finches, orioles and sparrows.

So it appears that the bird we saw at the other end of the lake is the most primitive bird species seen here.

John Keeling and his wife lead ‘Los Audubonistas del Lago’ which is a loose-knit group of people interested in birds. To receive notices of events please leave your e-mail address at www.avesajijic.com.