It’s great to be back in Ajijic after our summer sojourn in Toronto. It is always a delight to experience the wonderful weather here and get together with friends we haven’t seen in six months or longer. And this year there was an extra special pleasure awaiting us – the spanking new location for the Lakeside Bridge Center adjoining Mom’s Restaurant in Riberas. Bright, airy and spacious, it is a great place to indulge in our favorite addiction. My compliments to the hard working club directors and members responsible for putting this gem together.

The illustrated hand was played by herself and myself, sitting North and South, in one of our first games in the new club. It demonstrates once more that no matter how long one plays bridge, one can never come close to mastering it, there are so many variables at play, not the least of which is the human element.

Our opponents on this deal were Billy Heim and Lee Dorsey, long-time stalwarts of the club. Sitting East, Billy opened proceedings with a bid of 1 spade and I overcalled 2 hearts. Lee passed and herself raised me to 3 hearts. As it looked as though I had 2 spade stoppers, I took a stab at 3 no trump, figuring that 9 tricks might be easier to take than 10. After some thought, herself bid the heart game.

When Lee led the Queen of spades and dummy came down, I saw that I had my work cut out for me to make the contract. I could see one loser each in spades and clubs, and at least one in diamonds. Between my hand and dummy I could count 23 high card points and Lee’s 2 made 25. Surely, for his vulnerable opening bid in first seat, Billy would hold the King of hearts, so the heart finesse appeared to be futile. Also, if I lost a heart to Billy’s presumed King, he would return the King and another spade for Lee to ruff.

After due consideration, I decided that my best/only chance was to play a heart to the Ace, hoping to snare a singleton King in East, or failing that, concede a subsequent heart trick to East and hope that I could set up a late diamond trick to park my losing club. So with that plan in mind I won the Queen of spades in hand and confidently played a heart to the Ace, experiencing disappointment when Billy followed with the 4. However, I continued with my scheme and called for a small heart from the dummy on which, to my anguish, Billy pitched a club! I was now going down in a cold contract that my great Aunt Matilda would have made, and she doesn’t even play bridge!

All I could say to my opponents was: “Thanks a lot guys, that was some welcome back!” 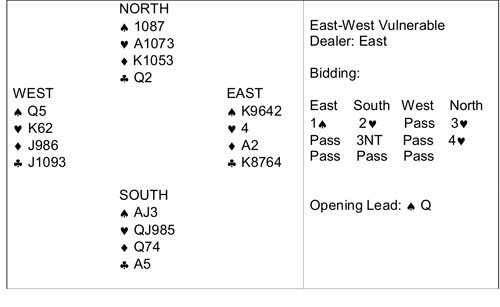