At the duplicate bridge table, it is sometimes advantageous to know the habits of your adversaries in order to garner the maximum number of tricks. In this month’s hand, West was a notoriously light opener who often rushed in where more conservative players feared to tread, causing confusion among his opponents and resulting in lucrative gains for his side. In this case, however, South and North were herself and myself respectively and we had played often enough against West to be able to use his aggressive bidding for our own benefit.

West opened proceedings with a bid of 2 spades, ostensibly showing a 6 card suit and between 6 and 10 points. North had an immediate problem as the hand, even though it contained 15 high card points, didn’t seem quite right for a take-out double (balanced distribution, only 3 hearts) or a 1 no trump overcall (no sure stopper in spades). However, I had also been the victim of West’s machinations in the past so I didn’t feel pass was right and ventured the slightly flawed double. East passed and herself had an easy jump to 3 no trump to end the auction.

West led the 8 of clubs and South paused to count her winners: 4 clubs, 3 diamonds, 2 hearts and 1 spade for a total of 10 tricks. Even though the North and South hands contained a total of 31 high card points, the mirror distribution worked against the promotion of additional overtricks. However, declarer did have one extra piece of information to guide her, namely West’s opening bid.

Declarer won the opening lead on the board with the Ace and cashed the King and Queen noting that West followed to all 3 rounds. Next South cashed her three diamond tricks and two heart winners as West obediently followed suit all the way.

Summarizing events to date, South knew that West had only 5 cards in spades, not the 6 that his opening bid implied, and even this wild bidder would need to have the King and Queen in his suit to justify his opening bid as the only other high card he had shown up with was the Jack of diamonds. Declarer was now ready for her coup de grace. Coming to hand with the Jack of clubs, South played a low spade towards the dummy and West was caught in a neat trap. Holding nothing but spades, he was forced to play an honor and return a spade into South’s Ace 10 holding, providing a second overtrick for declarer and a high matchpoint result. This time West was well and truly done in by his own impetuosity.

This was a particularly gratifying outcome for herself and myself but variations on this theme occur quite frequently at the bridge table. It is just a question of watching and counting the opponents’ cards as they play. 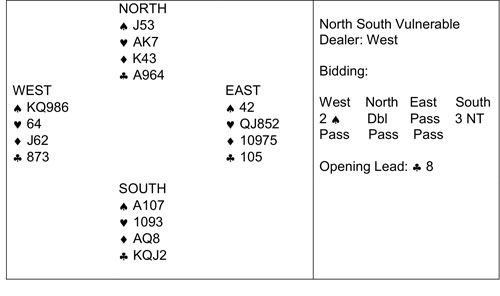