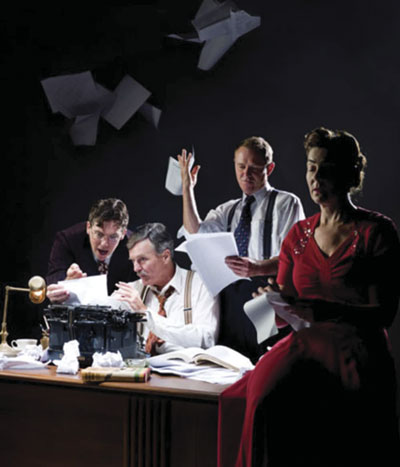 In 1992-93 I was serving as a chaplain in the oncology section of UCLA Medical Center. One of my duties was to co-lead a cancer support group for patients that the actress Jennifer Jones supported. Ms. Jones had won the Academy Award for Best Actress in the 1943 movie “The Song of Bernadette.” She played the part of the young girl who saw visions of the Virgin Mary in Lourdes, France in 1858 and was eventually canonized as a saint in 1933.

Twenty-eight years after my chaplaincy at UCLA, the play “Moonlight and Magnolias” is being produced by Ajijic Readers Theatre (at Lakeside Little Theatre) on October 16-18. It is the somewhat true story of the writing of the 1939 movie script for “Gone with the Wind.”

The three main characters are based on historic figures: David O. Selznick, the producer of the film; Ben Hecht, the screenwriter; and Victor Fleming, the director.

Written by the Emmy Award winner Ron Hutchinson in 2004, the play is usually described as a “farce.” And that is how it is advertised by Ajijic Readers Theatre. Indeed, it is mostly a comic, satiric depiction of the supposed five days it took to rewrite the script for “Gone with the Wind.” It surely has all the elements of a comedy: a rapid, no-holds-barred dialogue; the sudden switching of characters as Selznick and Fleming act out the roles of Scarlett O’Hara, Rhett Butler, Ashley Wilkes, Melanie Hamilton, the slave girl Prissy, and others of the Tara Plantation gang; and in the regular stage versions of it (not a readers theatre production), physical comedy.

Now, if you don’t know anything about the play when and if you go to see it, believing that it is only a “farce”;  or if you don’t want to think about the play too much while you are watching it; or, indeed, if some of the lines are deleted by the director in order to keep the play less of a social commentary and more of a verbal slapstick presentation, you will have missed how very socially relevant the work is today in at least three significant ways: Black Lives Matter, Anti-Semitism, and the Me Too Movement.

Consider the recent Black Lives Matter demonstrations throughout the United States and, indeed, throughout the world. One of the results of this was to take the book “Gone with the Wind” off the bookshelves, and off media streaming devices. But here comes “Moonlight and Magnolias,” billed as a “farce” by Ajijic Readers Theatre, and lo and behold! within the play, racism is used to get a laugh from the audience.  The actual and original movie screenplay that Selznick wanted to produce was even far worse in its racist comments than what was eventually allowed. Fortunately, there are protestations in this so-called “farce,” from Ben Hecht who decries any racist language or violence against Blacks. Hecht even writes some lines for Prissy (the young Black girl who is slapped by Scarlet) that addresses racism. However, these lines are rejected, even mocked by Selznick and Fleming.

Consider Anti-Semitism. This “farce” is set in 1939, when Hitler is gaining more and more power, and Jews are fleeing their homelands. Hecht comments on this to Selznick, a fellow Jew, who tells him that the three of them have a script to create, and that this is far more important than worrying about what is happening on the other side of the world or giving money to Jewish Relief. Hutchinson’s style of writing for the play is to have serious dialogue about the increasing horrors of Nazism interspersed with smart-alecky comments from Selznick, with Fleming having his share of them.  The seriousness of the moment is lost somewhat (if not a great deal), smothered as it is in the playwright’s desire to keep the “farce” going.

Then there is the Me Too Movement.  In the play, Selznick is playing a stereotypical role as a hard-driving, success-oriented, dominating white male who pushes around his personal secretary, a Miss Poppenghul. Again, this kind of fast-paced dialogue is, on the surface, somewhat funny. But is it really funny at all? Let me stress this point again: in the light of how the Me Too Movement has impacted today’s society; and how more and more women are telling their stories not just to each other but to the public. Is this something to laugh about?

Which brings me back to Ms. Jennifer Jones, who became David O. Selznick’s wife in real life. Selznick was long deceased when I met Ms. Jones, and her third husband Norton Simon the industrialist, did not have much longer to live. She herself was in her early seventies, and despite her extraordinary beauty and grace, seemed fragile to me. Still, she lived to be 90 years old.

Much has been revealed in these days about sexually abusive men. Think about the Hollywood mogul, Harvey Weinstein who is currently serving a 23-year sentence for rape. But also think about David O. Selznick, who was notorious for sexually abusing women. He was a man who used his power to create Hollywood stars. He bedded many women on the so-called “casting couch.” He took sexual advantage of them, promising them stardom. And Jennifer Jones was one of them.

And so, Ajijic Little Theatre will be presenting the “farce” “Moonlight and Magnolias.” I have read the script repeatedly, and with each reading it becomes not so much a “farce” for me, as a timely comment on how much more we have to do to create a world where Blacks, Jews, and Women will stop being marginalized by those who think they are superior because of their color, their religion, their gender, or the power they wield over others. So, yes, go see Ajijic’s version of this “farce,” but hopefully, you will dig beneath the gag-lines, and puncture the over-inflated characterizations. The play is significant in that way. And therefore it is not a farce at all.