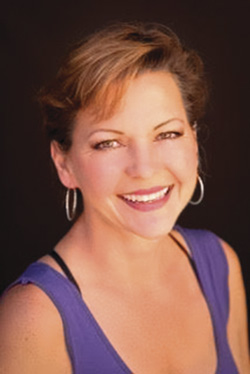 She shines like the star she is, secretly and humbly. I say secretly, because most people know nothing of her background and humbly because she is humble and unassuming about her talent. She takes the stage and the audience’s attention with a graceful ease, seen only on Broadway, La Scala, Teatro Colon and venues of that quality, yet she lives among us. We have the privilege of seeing her perform locally every now and again at The Lakeside Little Theatre, The Spotlight, Teatro de la Ribera, etc.

Who is this, you might ask? She comes from humble beginnings – Goshen, Indiana where she attended Goshen High and where her natural talent was first noticed. Born on the 30th of November, little Kristine was called “Twinkle Toes” by her father because she was always singing and dancing. Her mother was a journalist, just like her Grandmother had been and Kristine was a voracious reader, reading every novel, autobiography and tabloid in the house.

Unfortunately, her family life was not happy. Her mother left home when Kristine was in Junior High and she was left to be raised by a strict father. She joined a chorus and the director saw potential immediately. It was a time when teachers truly cared and the director drove to Kristine’s home to speak with her father. She explained that his daughter should be given opera lessons. Her father got Kristine lessons from a voice coach in Chicago. The lessons didn’t last long as her father didn’t think they were important, but between those lessons and the help of her older sister Kim, Kristine advanced her interest in performance dramatically.

Kim, Kristine’s sister, graduated from the American Academy of Dramatic Arts in New York and helped her sister to flourish. They were both State competitors in the National Forensic League, often winning in Dramatic Interpretation. Soon, with the help of Kim’s friend Jan Thomas, who mentored and encouraged Kristine and drove her to each competition, Kristine won so many awards she couldn’t count them all.

In her eternal search for a stable family life and encouraged by her sister, Kristine joined the Covenant Players, a Christian group of actors with cult-like devotion to their owner Charles Tanner. Tanner wrote, produced and directed all the plays and vignettes they offered as they travelled around the country proselytizing. $200 covered your entry and tuition with the Covenant Players. After a month of training, they traveled the country—“spreading the word.”

During one of these trips to spread the word, 18-year-old Kristine was driving one of the church vans. Having driven all day, she was exhausted when they reached Mississippi. One of the other players took over the driving and soon flipped the van. Another actor died as a result and Kristine was broken like a porcelain doll. She spent three days in a coma in hospital where they discovered she had eleven fractures in her pelvic girdle, a distorted coccyx, cracked ribs (one piercing her lung), a compound fracture of her left arm and an undiscovered fracture of the C6 vertebra in her neck. It was only much later, after many years of unexplained headaches, while traveling in France, that the fracture was discovered. At the time of the accident it seemed 18-year-old Kristine would never walk properly, let alone dance, act and perform.

Fortunately, her sister Kim, who was living in San Francisco at the time, took her in and nursed her back to health. It was at this time she met her first husband. The marriage was happy and, miraculously, produced three children, despite the previously shattered girdle.

In Concord, California, Kristine found and joined a non-denominational church which also helped her to recover from the trauma of that accident. She joined a singing group called “Worship Team” and got back into singing. Liana, a friend, helped Kristine re-enter the theatre and Kristine began to act again. This developed into a dinner theatre and they put on Christian Musicals. The minister, Rich Beckenhaur, left for the East Coast and Kristine became the Drama Minister of the church for four years, writing and directing “playlets” for monthly sermons.

Subsequently Kristine left the church to perform in Regional Theatre with The Willows, a professional theatre company and The Dean Lesher Center for the Arts as well as California Theater Arts. In the 1990s, she joined the John Mendelssohn Comedy Group called The Spandex Amazons. John, Fred Bald and Kristine played the San Francisco Bay Area comedy clubs after which Kristine moved to the Tri-Valley Repertoire, where she met her second husband, Darius Moily. At the time, she was performing in Once Upon a Mattress as “Lady Roweena” and as a principal dancer for the Theatre.

The couple honey-mooned in Cancun and fell in love with Mexico. Darius’ cousin suggested they look at the Lake Chapala area and when they did, in November 2007, they were sold.

Kristine and Darius Moily moved to Lakeside and, because talent is a hard thing to subdue, Kristine was soon involved in local performances. Her first audition for Laura was unsuccessful. However, following that casting faux pas, she played “Grace” in Little Mary Sunshine, followed by “Bianca” in Kiss Me Kate. Later, she performed in The Hollow, Mousetrap, and the rapidly compiled Extravaganza at Bravo Theatre. She was in Nunsense as a last minute replacement for the lead, Peggy Lord Chilton, who broke her knee, performing Peggy’s song and dance numbers as “Sister Mary Sunshine.”

After that Kristine starred in Chicago at Lakeside Little Theatre. She was a Founding Board Member of The Naked Stage where she directed several plays. She produced, directed and performed in the Spotlight Fundraiser called The Miracle Mac Review to help with Crooner Mac Morrison’s heart operation expenses. Recently, she starred as “Charity” in Sweet Charity Sand in the late Mark Boyer’s play trilogy, You Don’t Know Me. In addition to all this theatrical activity, Kristine joined Los Cantantes and went on tour with the singing group to Cuba as one of two soloists.

Kristine loves musicals of every sort, loves the theatre, especially community theatre with its spirit of diverse multiculturalism. She is definitely going to produce and direct another cabaret show in the near future and she intends to write a musical play called Divas. (I am not going to give any spoiler alerts as to its structure and content, so forget that.)

We are lucky to have Kristine in our community. She is a beautiful, talented and positive contributor to our lifestyle and entertainment. I consider myself lucky to have her as a friend, as well and will always have a chilled bottle of Chardonnay specifically for her any time she decides to visit.